Yemeksepeti, which was hacked last March and whose data was stolen, was again attacked by a hacker group. As a result of the said attack, user data was captured along with many metrics. Among the captured information usernames, phone numbers, addresses, registered credit cardslast 4 digits of yellow is located. It is stated that the number of members whose data was stolen is over 30 million.

The hacker group that carried out the attack was the owner of Yemeksepeti before putting the data up for sale. Nevzat Aydin. The hacker group, which wants to negotiate so that the data does not go up for sale, was not yet released during the attack. CEO told Nevzat Aydın, who did not leave his post, that only he was aware of the attack, and that if the payment they wanted was not made, they would announce the attack to everyone. The source of this news is exactly here. 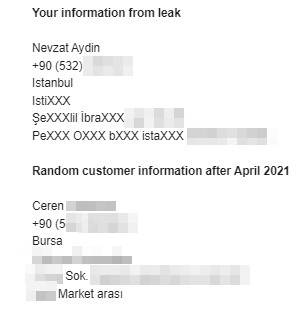 The group, which we thought could not get what they wanted from Nevzat Aydın, shared all the correspondence and a few data that proved the attack with the journalists. The data in question confirms that a lot of serious information has been revealed. This data includes information about many famous names, including Nevzat Aydın’s personal information.

When we think that such a situation may cause great troubles, we can say that a new punishment awaits Yemeksepeti.

At the end of the meeting between Nevzat Aydın and the hacker group, there is a third attack detail. It is stated that this attack will be carried out if the ransom is not paid. In other words, we can say that a third attack may have taken place and more information may be captured by the attackers.