Xiaomi took the decision to remove the survey because it did not reach the purpose of the Twitter survey that custom interface MIUI9 and Android One compared.

Xiaomi, one of the world’s largest smartphone makers, has been disgraced at the time she stopped sharing with her Twitter account. A survey comparing the company’s Android-powered user interface to Android One’s operating system was launched on Twitter, and Xiaomi removed the survey after receiving an unexpected result.

Xiaomi’s Mi A1 is available in all phones except for the MIUI user interface, Google Android’s original Android ROM ROM with the partner company ran Android One. It was funny that the company made such a share on its own Twitter page, which would normally lead to a higher vote for MIUI 9. Android One is the operating system preferred by Xiaomi users with 57%, so Xiaomi should be nervous that the survey was soon removed. 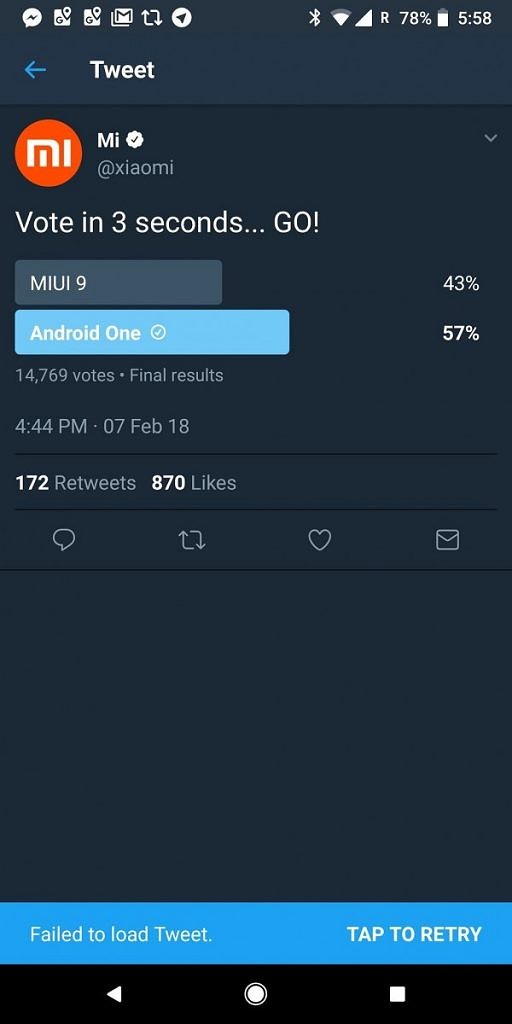 In total, 15,000 people voted in the survey, despite the fact that MIUI 9 had its own tons of applications, the pure form of Android won this struggle, creating difficult moments for Xiaomi. Xiaomi does not know if he will make more decisions after this survey, and will have more Android One phones, but it shows to other companies that big companies need to think twice about their results when sharing.

When Xiaomi has removed the survey, we will do the same survey on the basis of our country. Is MIUI 9 mu, where you have effective software on each other, or is Android One the purest form of Android?