When Qualcomm introduced the Snapdragon 8 Gen 1 chipset earlier this month, Xiaomi also announced that it would be among the first smartphones to use the chipset in its 12 series smartphones. At that time, the Chinese smartphone manufacturer did not announce when it would launch its new flagship smartphone series, but we recently learned that Xiaomi 12 will be launched in Beijing on December 28. The leaks that have emerged today allow us to take a first look at the official images of the smartphone.

Xiaomi 12 images were shared by tipster Evan Blass, who is known for providing reliable information. According to the images, the smartphone has a green skin, similar to the vegan skin that the Xiaomi Mi 11 has in China. The images also reveal the 6.28-inch screen size of the smartphone. Xiaomi 12 will be released in three different color options. It is possible to see these three options in the leaked images. It’s also worth noting that these images look like Xiaomi’s official marketing images. 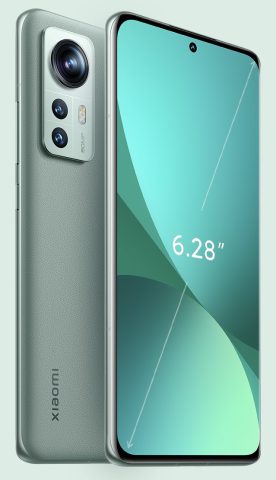 Xiaomi 12 will launch with MIUI 13, the official software version of the company, as confirmed by Xiaomi CEO Lei June. We’ve known for a while that Xiaomi is testing MIUI 13 based on Android 11 and Android 12. It looks like the first model to run the new software will be the Xiaomi 12. According to previous leaks, the Xiaomi 12 is expected to have three 50MP camera sensors on the back. However, when we look at the current sizes, it should be noted that this triple camera setup may only be valid for the Pro or Ultra version.

Finally, let’s mention that the Xiaomi 12 Pro variant will have the second generation LTPO technology and the Samsung E5 AMOLED display with 2K resolution.