Microsoft is slowly updating the missing parts of the newly released Windows 11 operating system and continues to fix some bugs. The Redmond giant announced the redesigned emojis in July. Now, with Build 22000. 348, these new emojis have been added to Windows 11.

The new emojis have removed the dark, black anahadollars from the Windows 10 design, and some have changed their shape and color to better match Apple’s, Google’s, and Samsung’s icons.

You can see the Windows 10 emojis in the left image and the redesigned emojis for Windows 11 on the right. In the new design, while the dark anahadols disappeared, they all gained a lighter and brighter appearance. 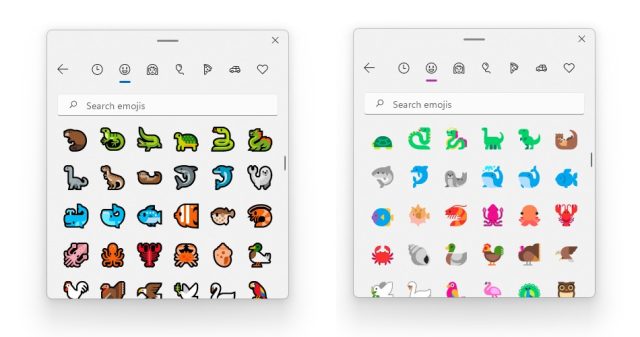 These emojis use the basic designs that Microsoft showed off earlier this year, but don’t use animation or “3D” touches like color transitions with added depth. The Verge speculates that this is a limitation of the vector graphics format Microsoft uses to display emoji on Windows. While using vector graphics can reduce file size, it can make it much simpler to scale emoji size up and down without losing sharpness or detail.

New emoji designs are available if you install the optional November 2021 Cumulative Update for Windows 11 via Windows Update. You can take a look at the details of the Windows 11 KB5007262 (Build 22000. 348) update nodollar here.