WhatsApp Android version is reportedly testing timer settings for disappearing messages. The Facebook-owned instant messaging app is currently working on disappearing messages mode and is making an effort to allow Android users to set different timings for their privacy ephemeral messages, according to a new report. It is stated that the latest update is seen in the beta version of WhatsApp for Android 2. 21. 19. 7. The company has not yet given any information on when it will activate the timer feature for all Android and iOS users.

According to WhatsApp feature tracker WABetaInfo, the changes appear to be available in WhatsApp Android 2. 21. 19. 7 beta. According to a shared screenshot, the default disappearing messages timer is available in the “Disappearing Messages” section of the app’s privacy settings. Users can set a time limit for disappearing messages here. Time limit options include 90 days, 7 days and 24 hours. In addition, if users do not want to use the temporary messages feature, the “Off” option will also be available on this page. When users activate the timer, the WhatsApp chat series will be deleted automatically after the selected time. 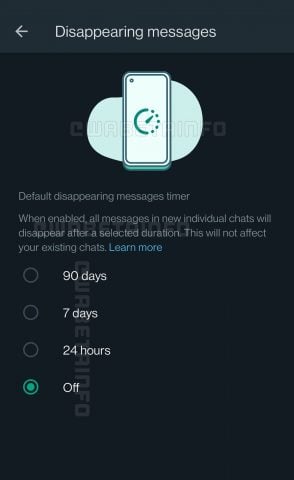 This latest upcoming feature is available as an extension of the existing “Disappearing Messages” feature, which allows users to delete messages from selected individual and group chats after a preset period of seven days. WhatsApp is also testing the voicemail transcription feature for iOS users. Over time, the new feature will become available for both Android and iPhone users.

Finally, it should be noted that it is not clear when the timer settings, which are still under development, will be available.