by Michael Lewis 1 month ago1 month ago
5kviews
319

The Video Electronics Standardollaryel Association (VESA) announced the release of Embedded DisplayPort (eDP) Standard version 1.5. Replacing the eDP 1.4b released in 2015, the eDP 1.5 maintains all the core features of the previous specification while offering additional capabilities and performance.

Used in devices such as laptops with embedded displays, eDP is widely used as it provides the highest resolutions, refresh rates and color depths using less wires with low EMI radiation. eDP applications include laptops, all-in-ones, tabledollarser, automotive displays and other systems that include a display panel with a video or graphic video source. 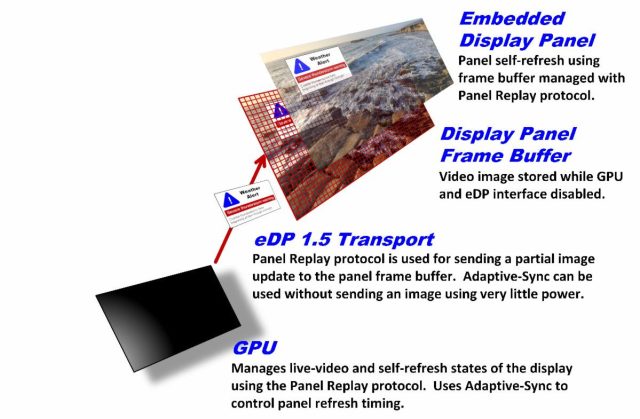 Panel self-refresh feature, static screenshots are stored in the on-screen memory while other parts of the system enter a low-power standby state. In addition, the system can momentarily wake up to update all or part of the screen when needed, which saves significant power in electronic devices. While compatibility with Adaptive-Sync is ensured with the new version, screen performance and power saving have been improved with the addition of Panel Replay protocol.

Other new protocols developed for eDP 1.5 include the ability to disable the display interface, which saves additional power. As with its predecessor, eDP 1.5 continues to support the use of VESA’s DisplayHDR and DisplayHDR True Black features.