We know that NVIDIA will expand its mobile GPU family with the RTX 3070 Ti and RTX 3080 Ti models. The newly leaked GPU-Z screenshot confirms all the technical details of the upcoming new flagship RTX 3080 Ti Mobile.

Today we expect the green team to make an announcement as part of CES 2022 and a powerful card like the RTX 3080 Ti will be introduced. The RTX 3080 Ti will be the most powerful mobile GPU to date. The GPU’s PCI Device ID appears with the codename “2420” and is stated to use GA103S GPU silicon. GA104 GPUs were limited to 6144 CUDA cores. NVIDIA, on the other hand, seems to have overcome this limit with its new GPU structure, and the new model comes with 7424 CUDA cores. 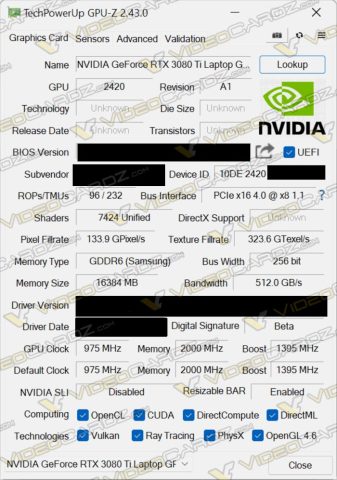 The upcoming flagship GPU will also be equipped with Samsung’s up to 16GB of GDDR6 memory on a 256-bit memory bus. The innovation here is in memory speeds: 16 Gbps (listed as 2000 MHz in the image). Thus, for the first time, a mobile GeForce version will offer 512GB/s bandwidth.

The screenshot mentions 1395 MHz frequency, but we will see configurations that can go higher than that. Although the RTX 3080 Ti seems to have a TGP of 175W, different adjustments can be made by the manufacturers.

Finally, we can say that the RTX 3070 Ti mobile version will be released. This GPU will most likely take its place in laptops with 5888 CUDA cores.