The deplorable results of the feelings survey organized by Gallup every year for our country have been revealed. He listed the world’s most nervous, most anxious, most peaceful and smiling countries. America was among the most frustrated countries in the survey.

Most of the countries in Northern Europe and South America were among the quietest countries in the survey. The survey results, which showed that 2020 was not so bad despite the pandemic, revealed that people mostly felt offended in the past year. Unfortunately, negative emotions experienced during this period were more than positive emotions; especially in Middle East countries.

There was no change in positive emotions 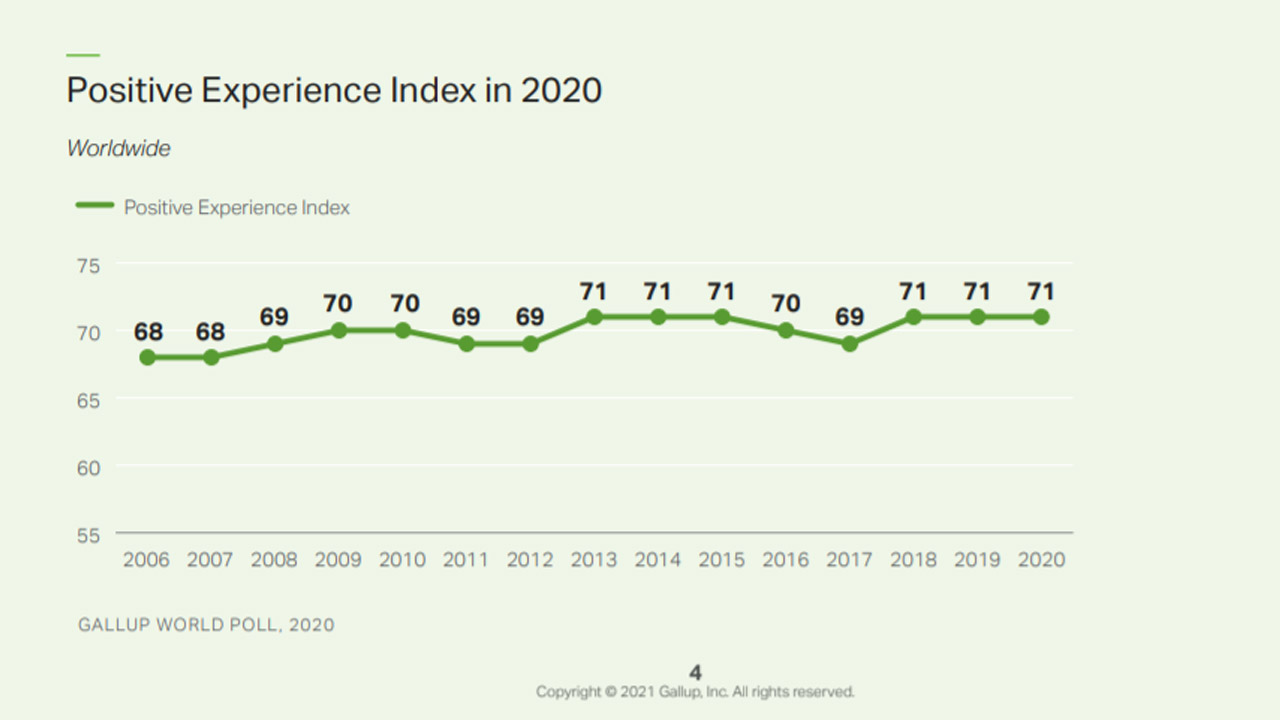 The positive emotions in Gallup’s poll, such as being healed, smiling or laughing, doing or learning something interesting, and feeling respected, haven’t changed much this year. There was a noticeable difference in feelings such as physical pain, anxiety, sadness, stress and anger. Even these feelings saw the highest level in the history of the survey conducted in the last 15 years. 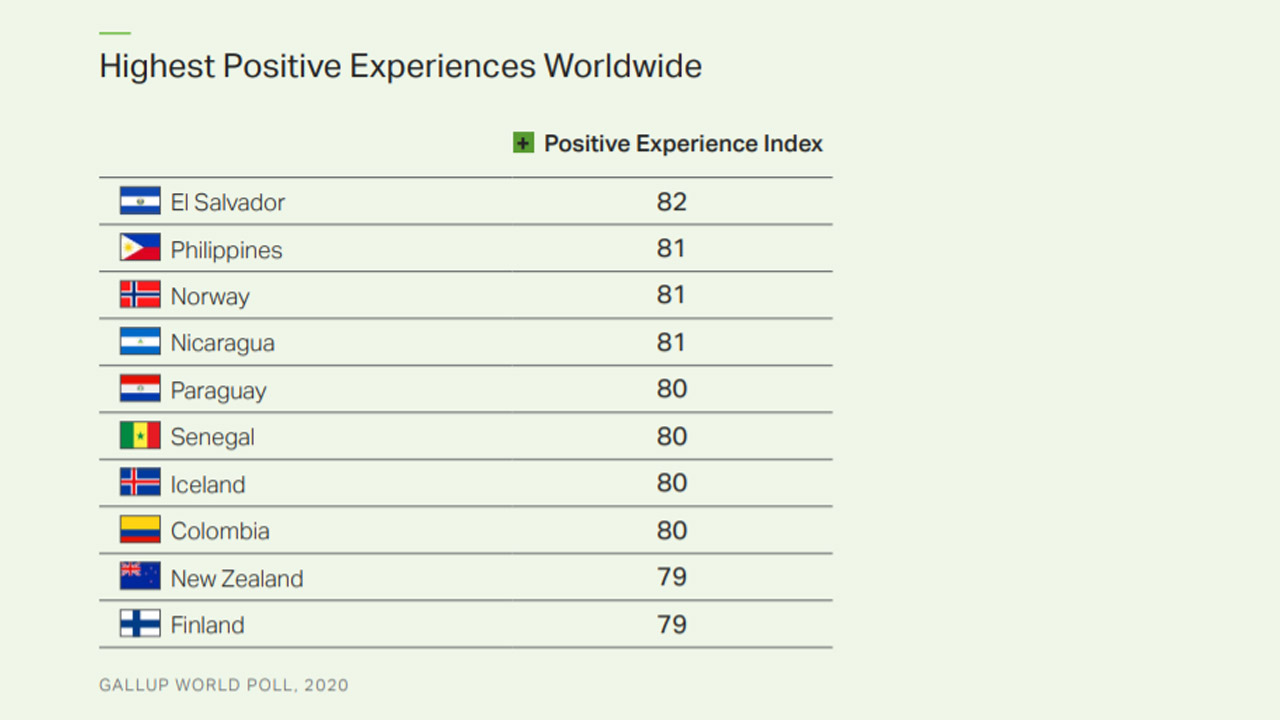 In the worldwide survey, the prevalence of positive emotions was as follows: 72% of respondents who stated their feelings before the survey day felt better, 72% felt pleasure, 70% laughed or smiled, and 70% 86 said they felt respected. The rate of those who stated that they did or learned something interesting and new the previous day was 49%. So more than half of the world spent that particular day monotonously. As a result of all this, the world scored 71 in terms of positive emotions, as in 2018 and 2019.

Positive emotions were least seen in America and Lebanon 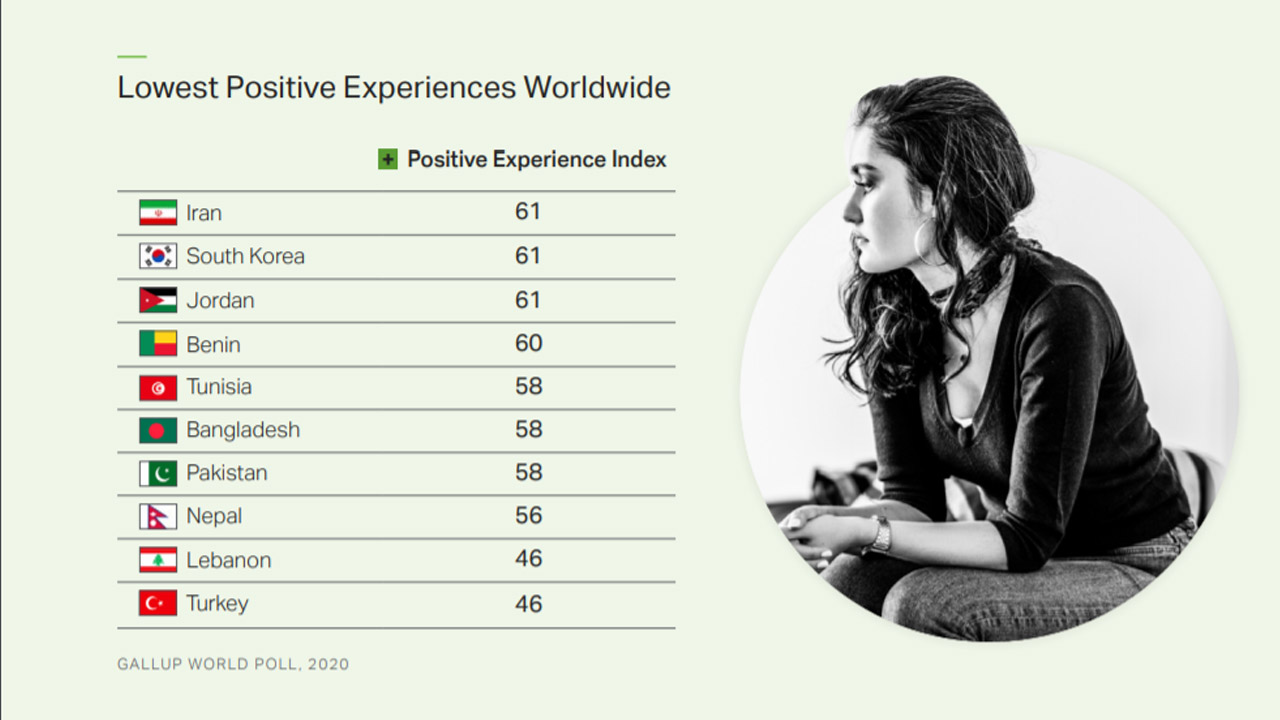 The country with the most positive emotions mentioned above was El Salvador with 82 points. The countries where these feelings were experienced the least were America and Lebanon with 46 points. The only country that fell below this number was Afghanistan with its 2019 results. However, Afghanistan did not participate in the survey this year. 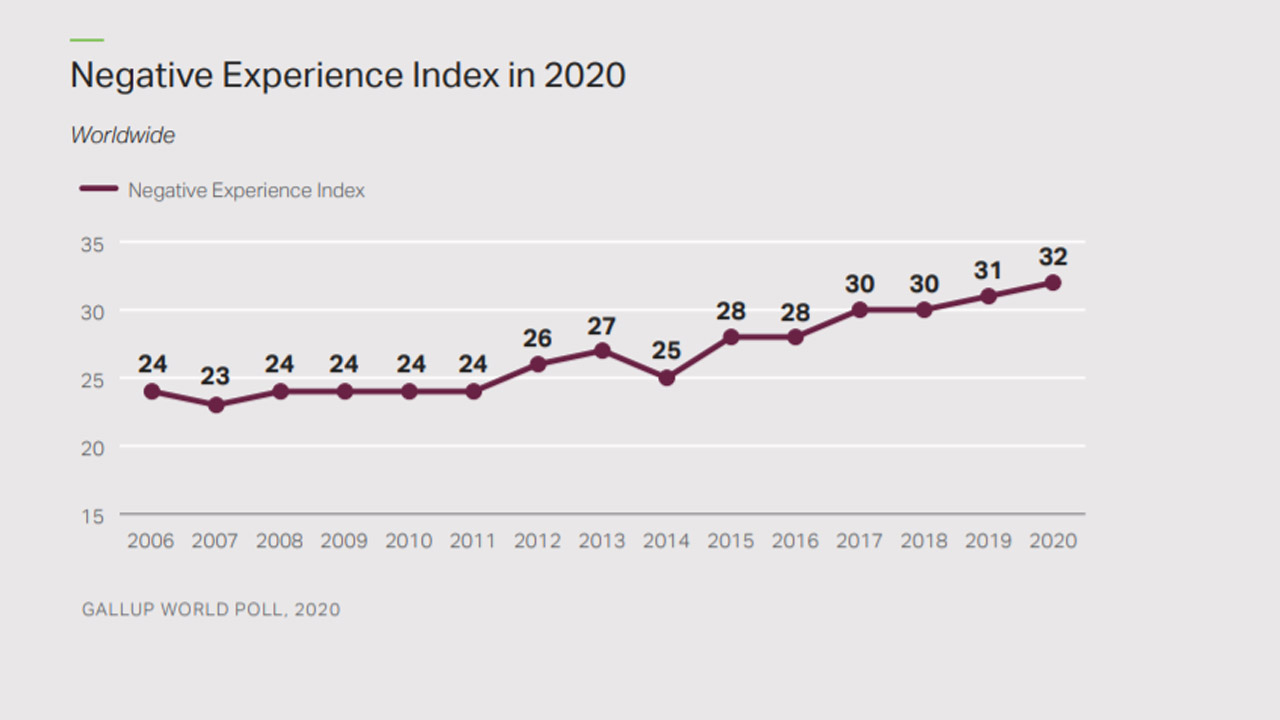 There was a noticeable increase in negative emotions such as physical pain, anxiety, sadness, stress and anger. The score, which was 31 in 2019, climbed to 32 in 2020. Again, the respondents who responded according to the day before the survey 40% anxiety and stress, 29% stated that they felt physical pain that lasted most of the day, 27% felt sadness and 24% felt anger. 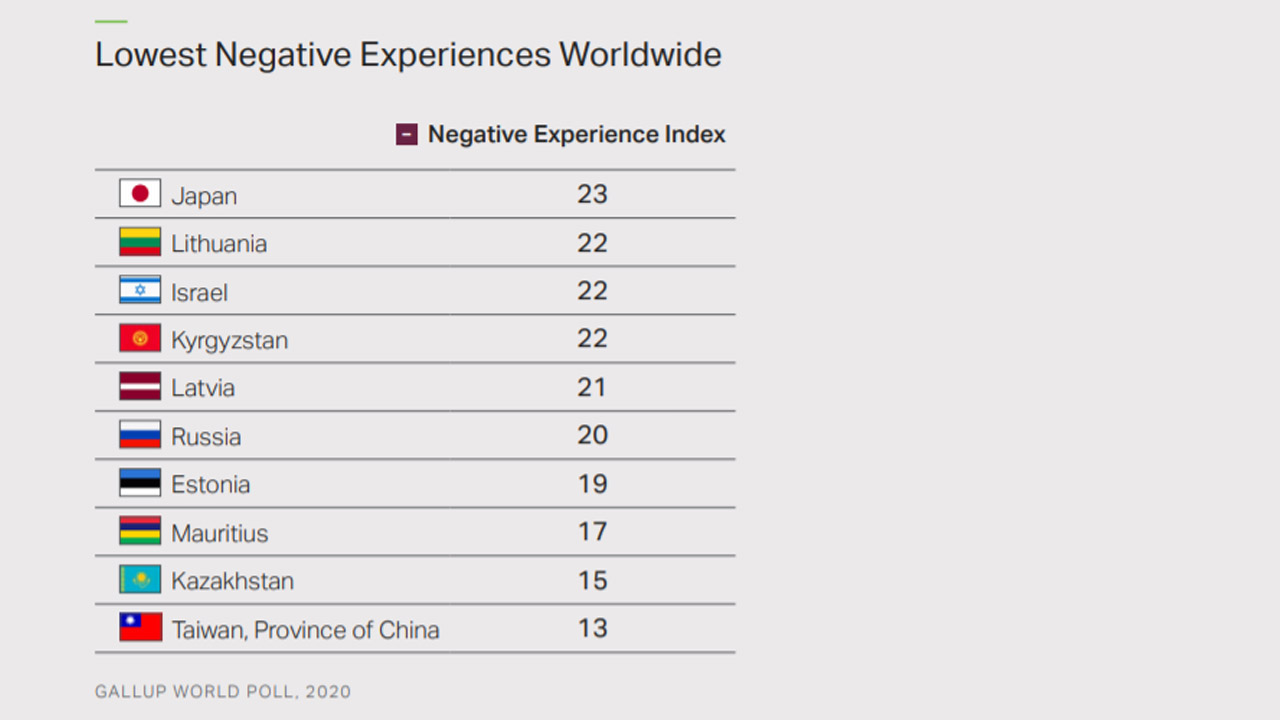 The country with the least negative sentiment was Taiwan. Asian countries such as Kazakhstan, Japan, Kyrgyzstan and Russia were also included in the top 10 of this list. Iraq took the lead in the list of countries where negative emotions were experienced the most. Most of the countries in this category were countries located in the Middle East.

The most peaceful Finland, the most angry Iraq and America 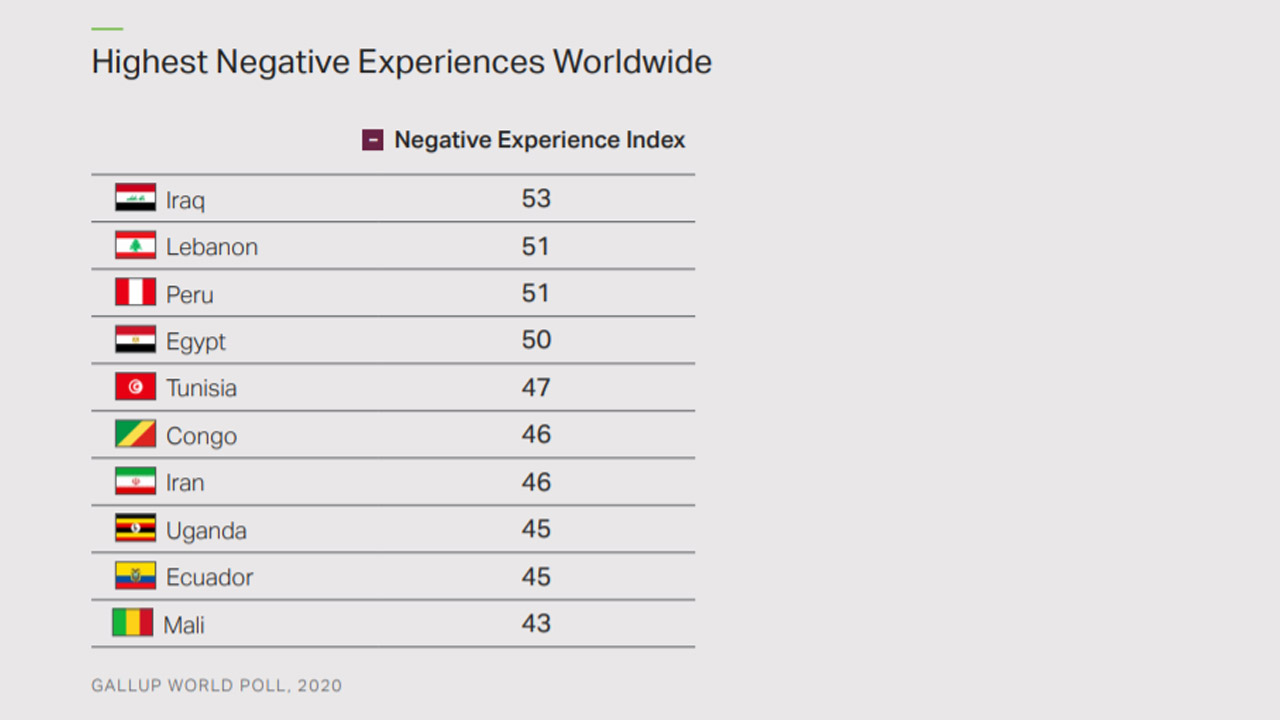 When we look at only anger from negative emotions, the country that experiences this emotion the most in 2020 Iraq happened. The countries that follow Iraq are, respectively, America, Lebanon, Tunisia and Egypt happened. Coming to the most peaceful countries in the world in the same year, Finland was the first, as you might have guessed. Finland was followed by Iceland, Uruguay, Portugal and Estonia in this area, respectively.