There are such brands in the world that two days pass without hearing their name. Although learning the pronunciation of these brands is not that much of a problem, it may take some time to learn the correct spellings. Because all of them are brands created in different countries and their names are taken from different languages, and of course, it is not possible for everyone to know the word structure of every language.

While reading the first part, you must have thought of a brand that you always confused about the spelling. So, with which names is the rest of the world in trouble the most? Data shared by Statista reveals the world’s most searched brands and how people often spell those names.

The most misspelled brands: 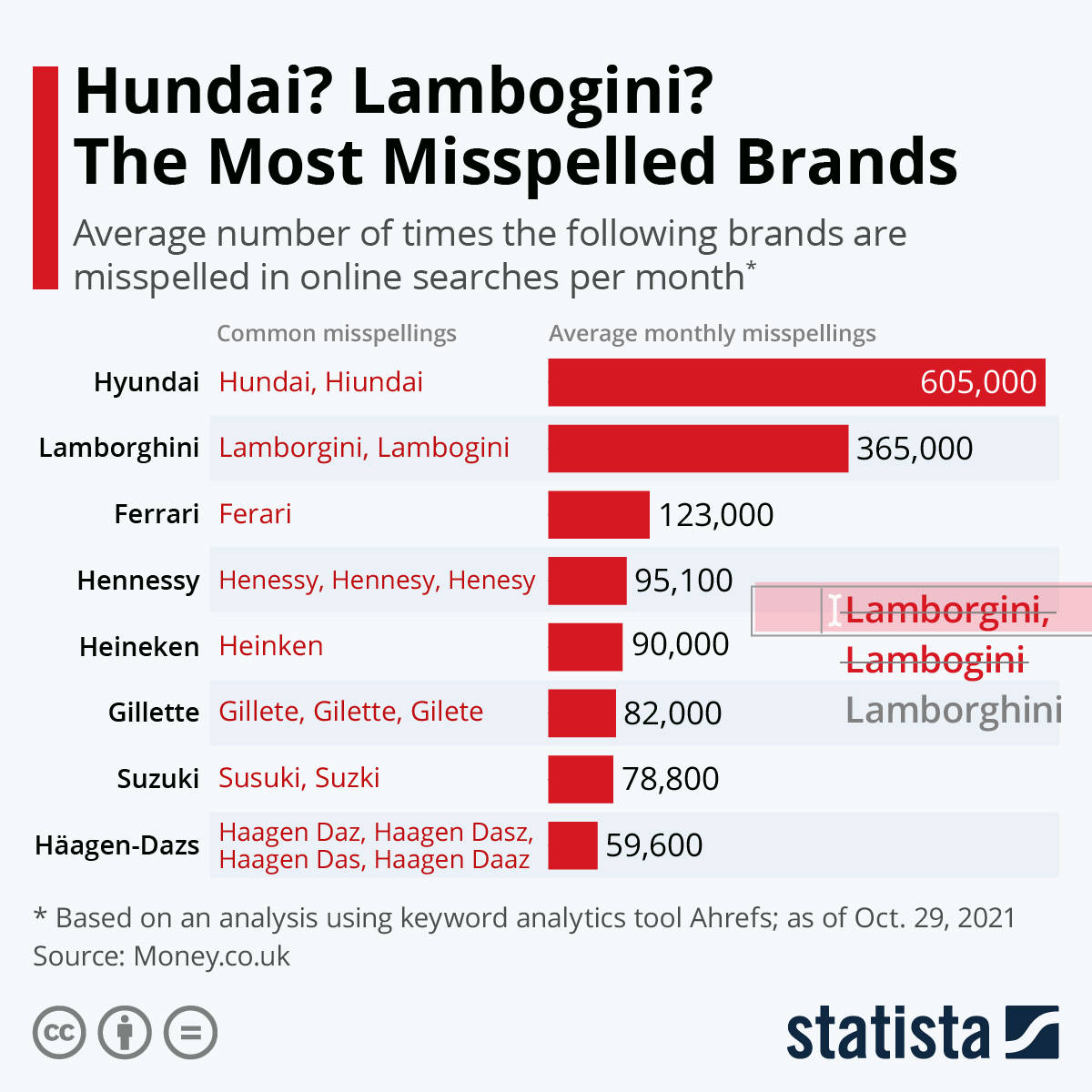 Money.co.uk’s research department has identified the world’s most misspelled names. put it into statistics. The research, conducted with data from Google, also revealed how many times a month these names are misspelled and in what ways. At the top of the chart created, South Korean automotive company Hyundai took place. The most common variations of the name , which were searched incorrectly 605 thousand times a month, were “Hundai” and “Hiundai”.

Italian automaker Lamborghini took the second place. The company, whose name is misspelled 365 thousand times a month, was most often referred to as “Lamborgini” and “Lambogini” after its original name. The name of Ferrari, which is also an Italian automobile manufacturer, was searched as “Ferari” 123,000 times a month.

The brandy brand Hennessy, whose name we hear in almost every rap song, took fourth place. The most common misuse of the brand, which is searched incorrectly about 95,000 times a month, was “Henesy, Hennesy, Henessy”. Beer brand Heineken was searched for “Heinken” 90 thousand times a month .

US brand Gillette, mostly known for producing razor blades, ranked sixth. Gillette was searched 82,000 times a month by typing binary letters just like Hennessy. The last car brand on the list was Suzuki, the Japanese brand that was searched for 78 thousand times a month with names such as “Suzki, Susuki”.

The eighth most misspelled brand on Google was the well-established ice cream brand of the USA, Häagen-Dazs. The most surprising member of the list , Häagen-Dazs is mentioned with names such as “Haagen Daz, Haagen Dasz, Haagen Das, Haagen Daaz” 59 thousand times a month.