The decline in graphics card prices is still continuing. A report published by DigitalTrends recently pointed to the decrease in graphics card prices. Today, German media outlet 3D Center has released an updated report for July measuring video card prices in Germany and Austria, showing some very interesting results. The published report only measures the price index of the two countries and their retailers in that country. Therefore, we can say that it does not apply to other regions. 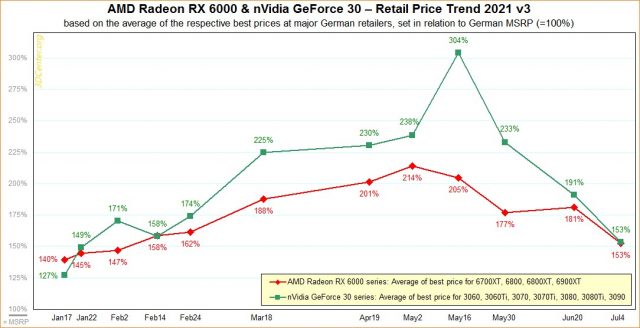 When examining the graphic above, 3D Center states that the MSRP is listed as 100% and it should not be forgotten that the percentage shown is the increase over the current MSRP. The German media outlet also expects full price cuts in MSRP to occur within 3-4 weeks. Considering the available data, we see that the MSRP is slowly decreasing and the supply is increasing rapidly. When all these criteria are considered, it is possible to expect a decrease in graphics card prices.

Finally, let’s mention that you can read the report published by 3D Center here.