ASUS made a post about the ROG Flow Z13 gaming tablet with external GPU support. It looks like Flow X13’s brother Z13 will be on the market soon. It should also be noted that this device has a powerful AMD processor and an RTX 30 series GPU. 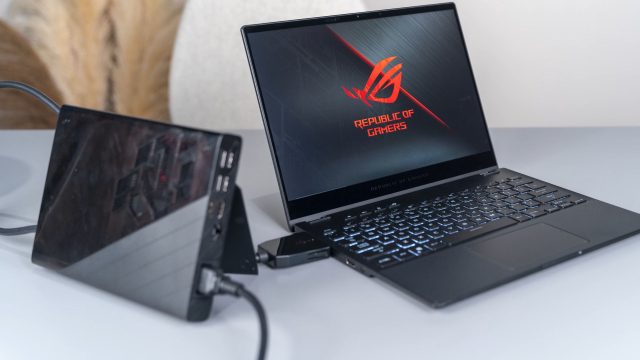 ROG Flow X13 was an ultrathin 13-inch gaming laptop that came with an AMD Ryzen 9 5800HS processor and GeForce RTX 3050 Ti graphics. In fact, we can call this device both a tablet and a laptop. Users can connect the RTX 3080 mobile GPU directly to the laptop to increase GPU performance. While similar Thunderbolt-based solutions already exist, the ASUS solution is incomparably successful.

The image released by ASUS confirms that the tablet will feature an XG Mobile connector. This shows that the tablet is Windows-based and targeted at the same market as the powerful 2-in-1 convertibles, the Microsoft Surface Pro 8.

We mentioned that the current model comes with AMD Ryzen CPU. The upcoming ROG Flow Z13 can also use the red team’s processors. In fact, it is very likely to come with AMD Ryzen 6000 series processors, codenamed “Rembrandt” with Zen 3+ and RDNA 2 microarchitecture, which we expect to be introduced at CES 2022. The launch of the new device will take place on January 4 and coincides with AMD’s event.