Like many other recently released MateBook family products, the new HUAWEI MateBook 14s is designed for the era of mobile productivity. Having everything on an employee’s wish list, the MateBook 14s distinguishes itself from the competition with features such as ultra-light portability, a large and vibrant display, and powerful performance, while also boasting unique Huawei smart software that delivers a truly seamless mobile experience.

Based on Huawei’s distributed technology, Huawei Share allows users to easily share files between different devices. With Huawei Share, cables are a thing of the past. If you have pictures, videos and documents on your Huawei smartphone that you want to transfer to your new Huawei laptop, you can quickly send them with just a few taps. But Huawei Share is more than just a simple file transfer feature. Among its many features, Multi-Screen Collaboration unlocks the potential of distributed technology by allowing users to simultaneously control two devices on a single screen. For example, if you have a Huawei smartphone, you can virtually mirror your smartphone’s screen to the HUAWEI MateBook 14s’ screen and view everything on one screen. 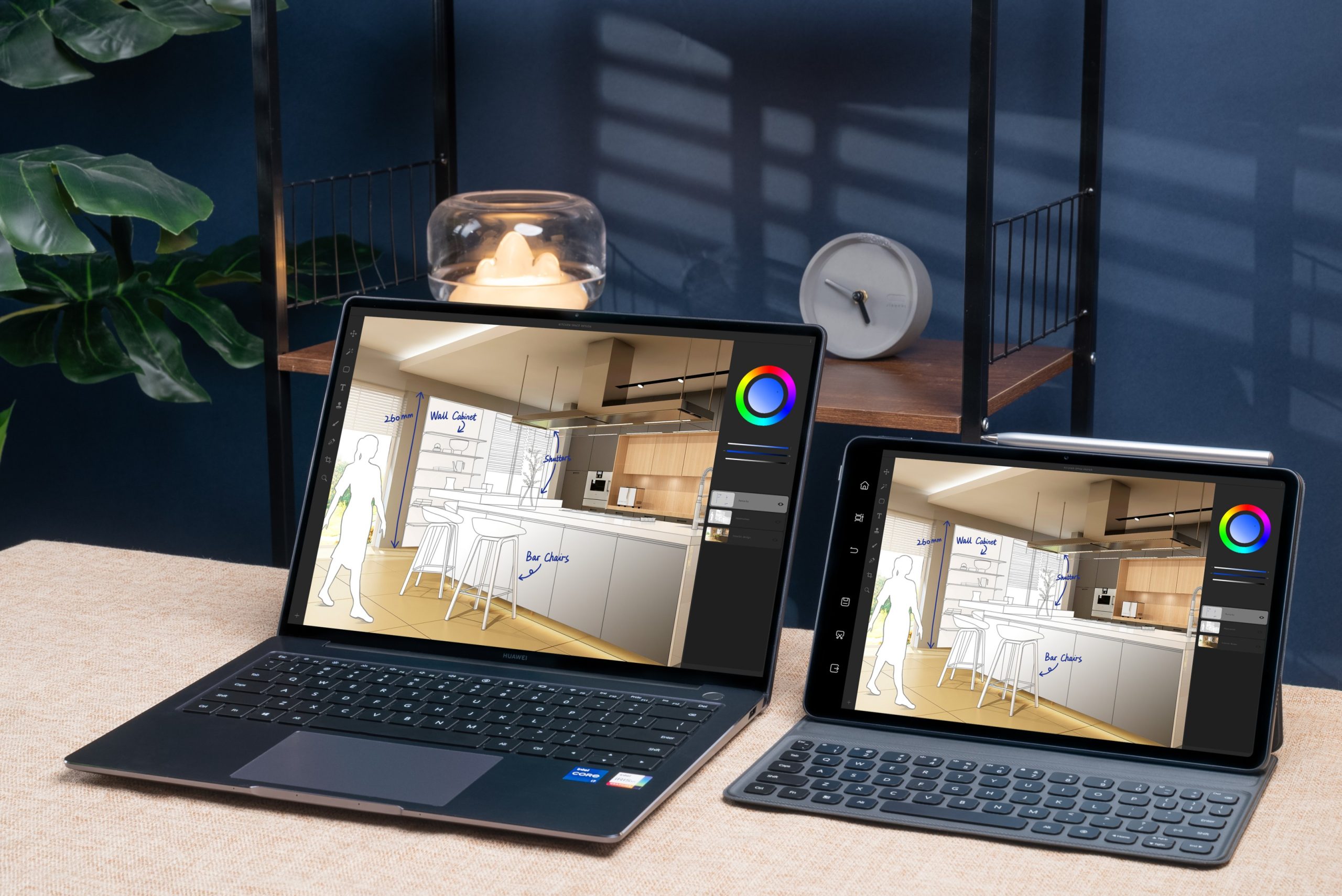 As the name suggests, Multi-Screen Collaboration facilitates seamless collaboration between two devices. With the Huawei Share function built into the touchpad, setting up Multi-Screen Collaboration is as easy as tapping the smartphone to the surface on the HUAWEI MateBook 14s. When two devices are connected, you can easily transfer files between them by dragging files between the interfaces. Since peripherals are also shared, you can use your keyboard and mouse to control the connected smartphone or tablet, or even use apps from one device to open files stored on another device. Want to edit a photo you’ve just taken on a smartphone? Simply launch your preferred editing software on the MateBook and take full advantage of the computer’s software and hardware for quick image tweaks. Distributed technology connects two devices at a system level, so you can make and receive audio and video calls through your PC and use the microphone and camera on the PC to chat.

Another useful feature of Multi-Screen Collaboration technology is the different display modes that increase productivity and offer a new experience of using multiple devices in a single ecosystem. There are three modes available to meet the needs of consumers in different environments: Mirror, Extend and Collaborate.

In mirror mode, the laptop interface is copied to a tablet and the same content is shown on both devices. For example, when designing on a laptop, you can use this feature to project your work on the tablet and add even more detail to your work by using the tablet as a digital drawing board. Another example, when there is no projector around but you need to give a presentation, you can use Mirror mode to mirror your PC screen to the tablet; so you can look at your computer while others are looking at the tablet during your presentation.

Expansion mode, as the name suggests, can be used as an external display for a PC. This greatly increases productivity by giving the user a larger area to view and compare content. Many users choose to add an extra monitor to their desk to increase productivity. But traditional monitors are bulky, heavy and much less portable, so you can take your HUAWEI MateBook 14s and, for example, a HUAWEI MatePad 11 for business trips. You can use the tablet to read, organize files, play music or watch videos while traveling on the train or plane. Wherever you go, you can use two screens and work more efficiently. 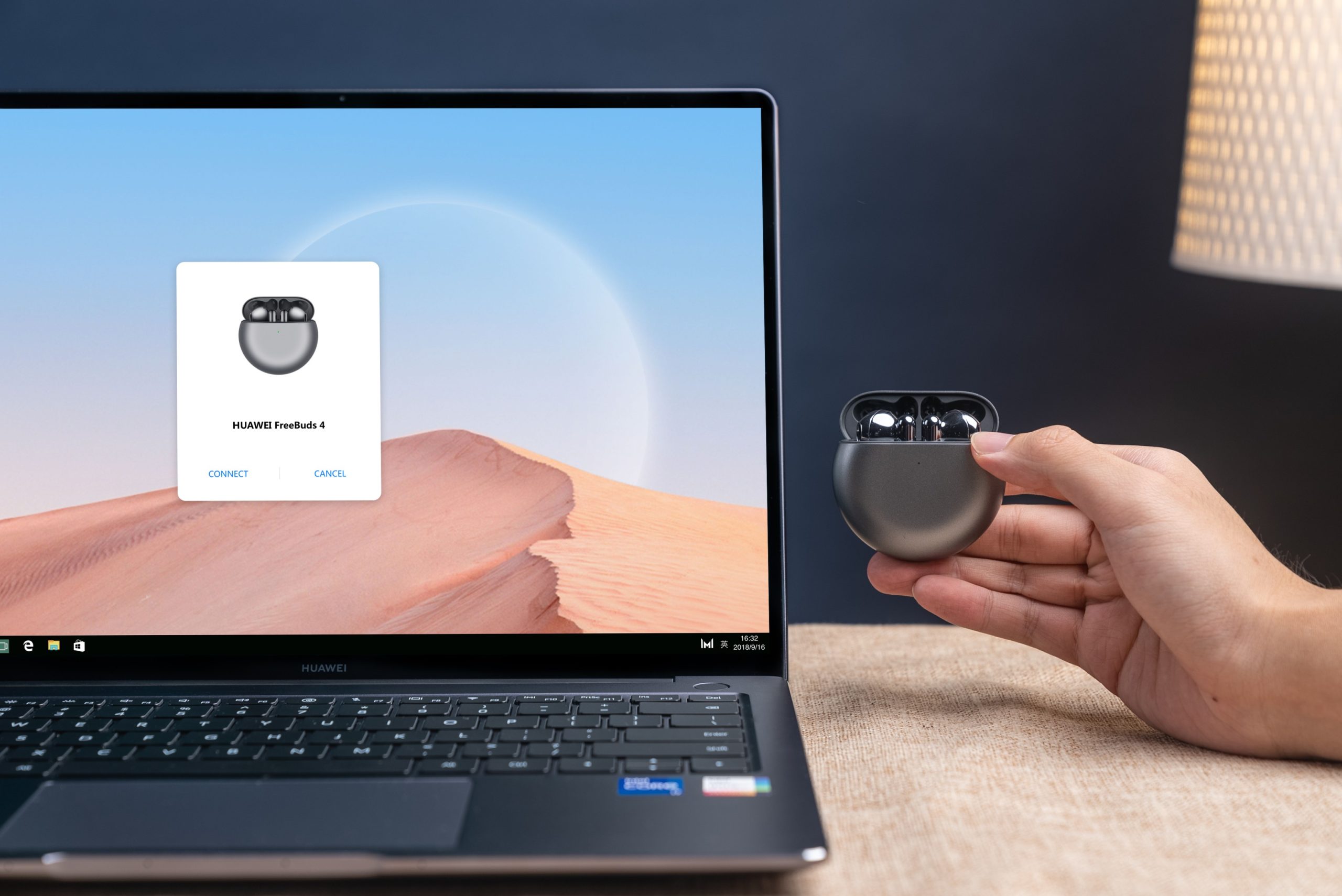 The final mode is Collaborate mode, which breaks down barriers between Windows and HarmonyOS 2 for the first time. Users can use the laptop mouse to drag and drop selected text, images and files between the two devices. Meanwhile, they can use the laptop keyboard to reply to messages and emails received on the tablet. New updates to Multi-Screen Collaboration also make it possible to open up to three mobile apps on PC at the same time. It’s the perfect solution for those who like to have everything open at once, whether it’s three business apps or a shopping app.

Another feature that Huawei has spent years perfecting, PC Manager adds a number of useful features that make using the HUAWEI MateBook 14s with other Huawei devices more satisfying. To name a few, Instant Hotspot makes tethering setup super easy – with one click in PC Manager, you can connect your PC to the Internet using your smartphone’s cellular data. Managing photo galleries across your devices just got a whole lot easier with PC Manager, which centralizes all your media. Taking screenshots is incredibly intuitive with the built-in tool that lets you take rectangle, window, full-screen or freestyle screenshots in just a few clicks.

The MateBook 14S i7 is priced at $14,999 with the CD Classic Backpack, AX3 Dual Core Router, Mini Speaker, and 12-month extended warranty, while the i5 version is $13,999. In both models, consumers can benefit from the advantage of 4 installments without interest.