SiFive, which prepares RISC-V based designs, was developing low-power cores for microcontrollers in 2016. Continuing to build on it day by day, the company produced a chip capable of running the Linux operating system in late 2022, and this week they announced that they are developing a CPU core comparable to CPUs developed by Intel and ARM. 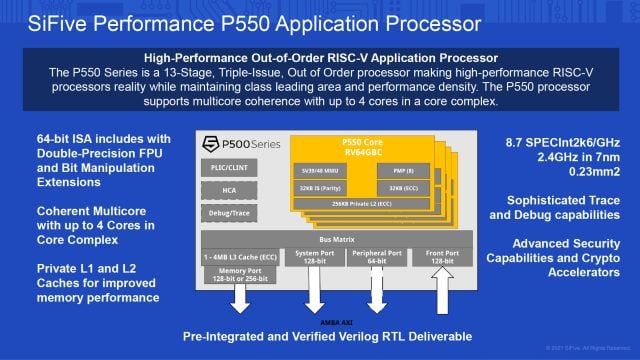 SiFive believes such high-performance designs can be used for a wide variety of applications, including 128-core server-grade SoCs. The company claims that when implemented in the 7nm manufacturing process, the new P550 core measures 0.23mm2 and can run at around 2.40GHz. As for performance, the P550 offers a SPECINt 2006 score of 8.65/GHz, comparable to the performance of modern ARM and x86 cores. Meanwhile, SiFive says the P550 offers a triple performance increase per mm2 compared to the ARM Cortex-A75.

The company that needs it can now license the P550 core from SiFive. As this is only one CPU core, licensees can use any special purpose accelerator, IP and I/O interface to get a unique SoC to meet their needs.

The developer says that the next-generation Performance core can offer 50% higher performance compared to the P270. It will also be possible to scale designs up to 128 cores and use them in high-performance applications.

James Prior, SiFive’s senior director of product marketing and communications, says the next-gen core will be available as a deliverable RDollars next year. Customers will also be able to test the core in FPGA models.