TweakTown has overclocked the memory used in the new flagship RTX 3090 Ti graphics card. The webcast also shared details on the potential gains of overclocking in crypto mining.

GeForce RTX 3090 Ti, as you know, basically runs at 21 Gbps memory speed. During overclocking, the memory saadollarseries exceeded 1538 MHz, which increased the effective memory speed to 24.6 Gbps. Bandwidth, on the other hand, theoretically reached 1181 GB/s with the increase in memory speed. This value is probably even higher than the upcoming RTX 4090 graphics card. However, memory operation at such high frequencies for a long time can cause stability problems. 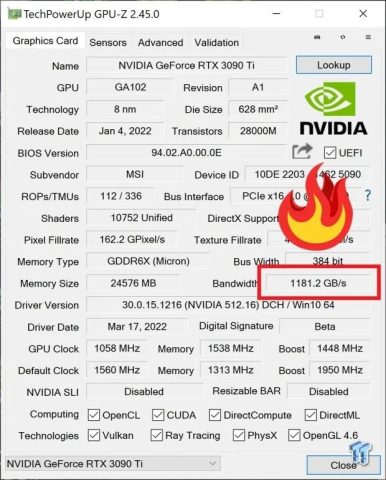 MSI SUPRIM X card working with 24 Gbps memory reaches 130-132 MH/s in Ethereum mining. In other words, there is a difference of about 25% with the RTX 3090 Ti running at stock speed. However, it is important to note that the RTX 3090 Ti has a lot of low voltage potential and crypto mining does not need a GPU clock and power limiters to be at its peak.

On the other hand, the GeForce RTX 4090 graphics card, which will come with Ada Lovelace architecture, is also expected to be offered with 21 Gbps memory speeds. However, NVIDIA, who will make the final decision, may choose to use 24 Gbps GDDR6X memory in the RTX 40 series.