As you know, a new variant called Omicron was discovered a few days ago. We don’t know enough about Omicron yet, which some scientists have already warned is the strongest variant. However, the variant is spreading gradually and although it takes some time to see its effects, it is useful to be cautious beforehand.

Prof. Dr. Mehmet Ceyhan also mentioned exactly this in his recent statement. Stating that the virus has already reached many countries from South Africa , Ceyhan stated that many pandemic measures that were left should come back.

Countries and number of cases reached by the variant: 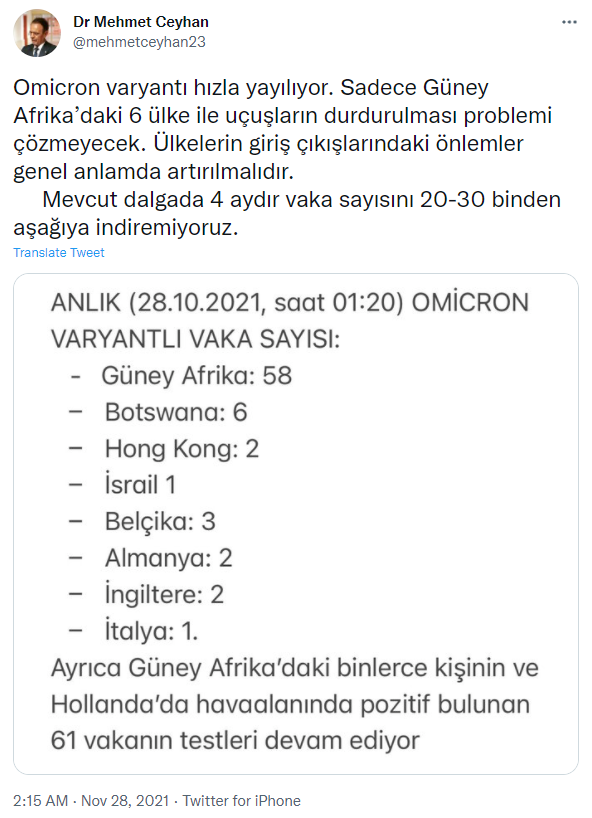 Hacettepe University Faculty of Medicine Department of Pediatric Infectious Diseases Head Prof. Dr. Mehmet Ceyhan mentioned that the measures taken in the origin of the variant are not sufficient alone to prevent the Omicron variant cases. Because, after the virus emerged in South Africa, stopping the flights of 6 nearby countries could not have been a move that brought the end of the variant after the variant reached Europe. Ceyhan, which also lists the countries where the Omicron variant is seen, explained the precautions to be taken as follows:

The Omicron variant is spreading rapidly. Just stopping flights with 6 countries in South Africa will not solve the problem. Measures at the entrance and exit of countries should be increased in general. In the current wave , we have not been able to reduce the number of cases below 20-30 thousand for 4 months . And if the omicron spread starts, we may be in a difficult situation. For this reason, we should take the following measures without delay: