Razer produces a tablet-sized, working mechanical keyboard for CES 2018, one of the world’s largest technology events held in the US!

Mechanical keyboards are, in fact, quite old technology, especially in recent times when the players are the first choice. In fact, production is much cheaper than electronic keyboards, but brands such as Razer especially sell their player equipment at a price that is a bit more expensive. Although I personally find it nonsense to give this kind of money, I do not feel a “wish ..” when I see the Razer’s many player keyboards.

Of course, with the arrival of the Consumer Electronics Show 2018 (CES 2018) in the US state of Los Angeles, many companies have introduced quite interesting technologies at their booths. But even if it flees most of the news, the secret star of CES 2018 was the giant mechanical keyboard that we actually produced and really worked to display the Razer in the stand. 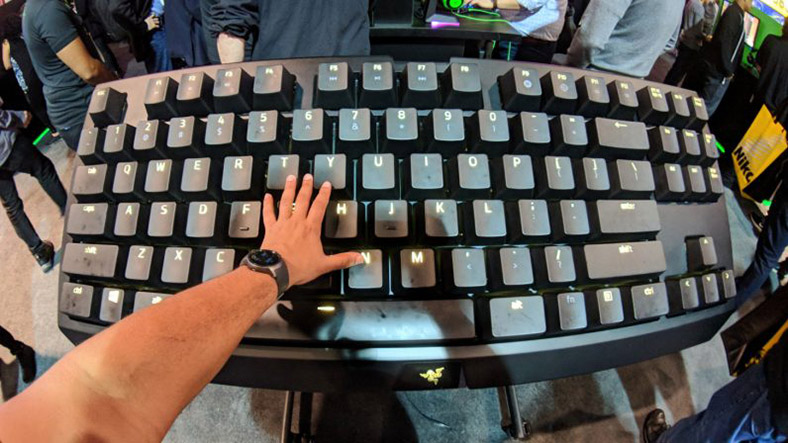 The giant keyboard with almost all the features of the Razer’s Chroma series keyboards also has features like changing the light on the Chroma series. However, only the products produced to exhibit will not be sold. Razer’s officials also point out that mass production of the giant keyboard would be very difficult and that the number of customers who would like to have a giant mechanical keyboard would not be too great.

They may be right about mass production. However, they are quite mistaken about “not finding the customers who want to have this gigantic thing”. I think it would be quite enjoyable to play CTRL + ALT + DELETE with this giant keyboard or play a car race. What are you thinking? If something like that went on sale, would you like to buy it?