Specially designed for Xbox Series X, this monitor eliminates the most important shortcoming of the model we reviewed before, the new model supports HDMI 2.1! In this way, this monitor, which supports 4K/144 Hz, can provide the highest possible data transfer on PC and supporting consoles.

There is a close cooperation between Microsoft and Philips, especially in this period. The fruit of this is low Input Lag in this new model, which is especially important in fast games. Unlike old generation monitors and TVs, fast control and competitive gaming is possible with a controller or keyboard and mouse. Tearing and stuttering are prevented with Adaptive Sync, and a full HDR experience can be offered thanks to DisplayHDR 1000.

Perhaps one of the most important features of this monitor is that it is equipped with AmbiGlow technology. For this technology, we can call it the monitor version of Ambilight technology in Philips televisions. It can follow video or audio and can be adjusted to different power levels. The 3 light zones on the back of the monitor light up according to the content being played on the screen. The LEDs here are very fast and powerful. Colored light reflecting the screen content on the wall behind creates a very effective scene. It enlarges the image on the screen, giving it a cinematic effect. 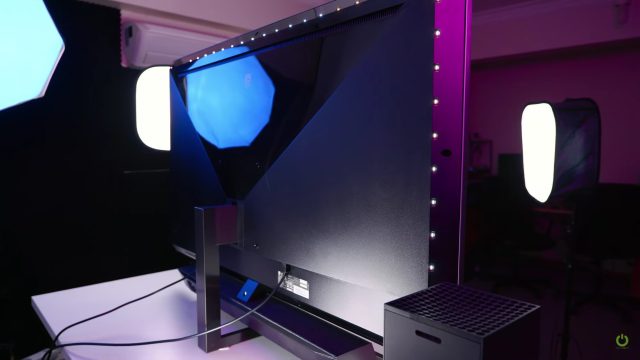 The Bowers Wilkins sound system at the front also offers powerful sound without the need to buy a separate Soundbar. Both the sound output power and the sound quality are incomparably better than standard monitors or televisions. This system, which supports 40 Watt and 2.1 channel, is very successful. Of course, those who want Surround can exaggerate even more, but it depends on the taste and ear difference, and how much bass you want to hear.

The monitor’s stand is sturdy and doesn’t wobble, but it can also be wall-mounted with the included screws on the back if you prefer. But there is one point I would like to draw attention to here. Changing the sound and backlight settings of the monitor according to the setup affects the result.

Do not forget to choose according to positioning on the wall or stand for sound and light in the settings. A similar setting exists on Philips TVs with Ambilight support, with the sound and backlight changing directly to match the TV position. 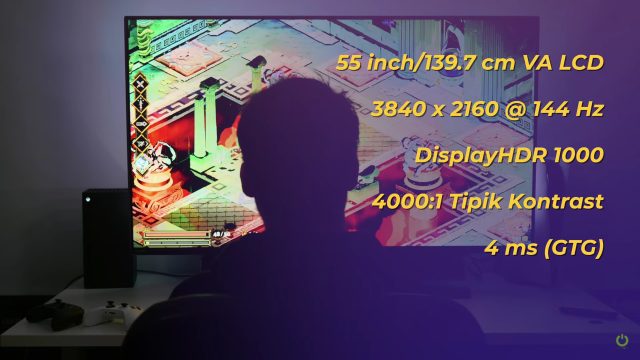 In general, it is a full sofa player screen, comfortable to adjust the OSD and volume with the remote control. In terms of design, it is suitable for the living room, game or home theater. Playing games on a sharp 55-inch 4K screen designed as a monitor, not a TV, is a different experience. The fact that the glossy coatings of classic TVs called “glossy” are not used in this model makes this experience different.

Connection Portollaryellow and Its Functions

All the HDMI ports on this monitor are yellow HDMI 2.1, you can plug an Xbox Series X into one, a PS5 in the other, and a 4K HDMI Android TV stick in the third. You can also connect to a PC via DisplayPort, and you can connect a laptop or mobile device that supports it via Type-C port. Özedollarse is designed for you to use a single giant screen for all purposes. 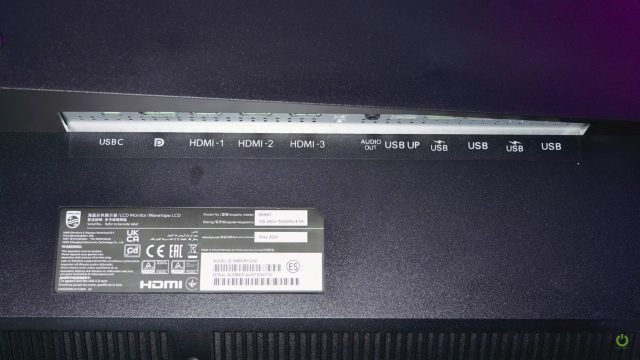 PBP mode is also supported, so you can see two devices at the same time, which is useful when you need to follow your work in the background. However, for normal entertainment, there are black bars at the top and bottom due to the scales and it wastes screen space.

The HDR settings of the monitor are very rich. Let’s say you have a PS5 plugged in, HDR is turned on directly. You cannot make detailed brightness and gamma adjustments when HDR is on. But there are many HDR modes. It’s nice to have a lot of options for different standard HDR content and devices like Xbox, game HDR modes, DisplayHDR 1000 mode.

Philips has used a VA panel with 4000:1 static contrast in this model and the color richness, contrast, visibility is very good. But of course, there are those who do not like VA panels. In black and static scenes, the blacks are not as deep and saturated as OLED or Mini LED, which is becoming common in new PC monitors, and not isolated from the environment. 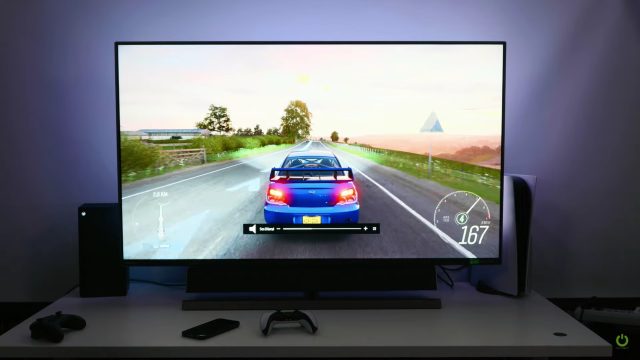 With 4ms of experience in standard mode and sitting distance, motion blur offered a better experience than we expected. There are also faster reaction mods, but the gains after the first level are not so much. Of course, the zero motion blur provided by 0.5 ms GTG on a 24-inch tournament monitor is a delight. However, on this 55-inch screen, motion blur was not at a level that bothered us.

On the PC, we were able to open 4K/144 Hz under Windows 11 and enable 10-bit color from the NVIDIA control panel over DP. Even as 8+2 Bit FRC, it is possible to increase it to 1.07 billion colors and reduce bang. 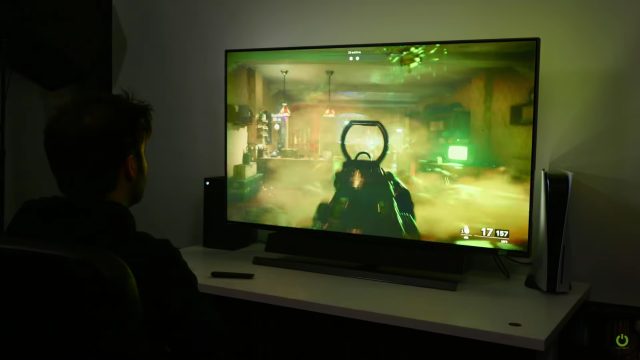 When we play games in a bright environment, in a dim environment and in the dark, we can often say that we have a good time on the big screen. There were also some cons that we saw during this time. For example, the length of the DisplayPort cable that comes with it is short, it is necessary to put the PC case close. The transition time between the entrance portals and yellows can take a few seconds.

Ambiglow resets to static mode every time the image source changes. Philips needs to do some updating on the software part of this Ambiglow. For example, Ambiglow does not have the option to adjust the light color according to the background wall color on the TV. This is an important detail if you have dark walls. Özedollarse Ambilight experience remains better than Ambiglow at the moment. Smart home features such as synchronization, equalization, connection with different devices are also based on Ambilight. 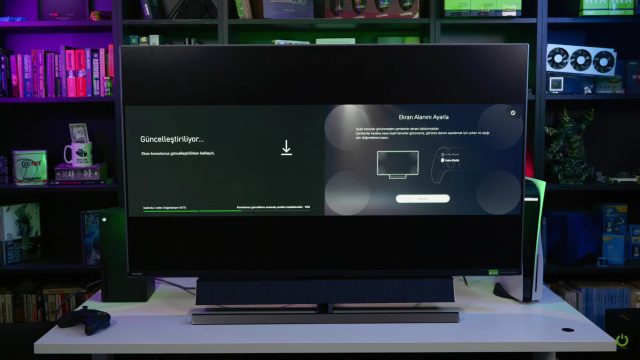 This 55-inch giant of the Momentum series, which is currently competing with televisions in terms of both price and features, has different pros and cons in comparison. Yes, there is no built-in TV and satellite receiver. However, both can be connected externally. And some users find HDMI TV products more functional than built-in TV functions. Many users use separate set-top boxes, as traditional built-in satellite receivers also change channels slowly.

Since TVs do not have image resolution and frame rate upscaling features, you watch whatever you view from the port, which is better for some viewers. However, we do not recommend everyone to buy a monitor instead of a TV. First of all, personal preferences are very important in terms of panel and image differences.

The Philips Momentum 559M1 is a solid product with a faster refresh rate and controller responsiveness, a certain pixel color changing speed, a richer color palette, an additional internal soundbar rather than a built-in sound system. Philips has made it necessary by closing the HDMI 2.1 deficiency in the previous model in this new model. The Philips Momentum 559M1 is technically a very powerful product and is a great option for those who want to have more control and adjust every setting on the giant screen in their entertainment center.