Reports that NVIDIA’s A100 accelerator will be used in crypto mining appeared in early March. After a period of silence, photos of the redesigned A100 with the name CMP 170HX have been published and now we see the crypto mining performance.

Initial reports mentioned a CMP 220HX brand with performance around 215 MH/s for Ethereum mining. The CMP 170HX model, which has now come to light, can offer values ​​​​at the level of 165 MH / s with a power consumption of 250W.

The CMP 170HX was most likely built with defective chips that were not used in the company’s A100 accelerators. This mining card appears to have 40 or 80 GB of HBM2e memory and 6,980 CUDA cores. This means 84% ​​of the cores in a full GA100 silicon.

NVIDIA has included 4,480 CUDA cores (54% of the cores in the GA100) while trimming everything that isn’t necessary in this card for cryptocurrency mining. HBM2e memory (8GB) is reduced to the minimum for Ethereum mining while providing a maximum bandwidth of 1,493GB/s on a 4096-bit bus.

In the GPU-Z screenshots, we see that NVIDIA’s 471.41 driver is used when identifying this card with the 20C2 Device ID. The cores can reach 1140 MHz base and 1410 MHz boost clocks.

Memory speeds are much more important than core speeds in cryptocurrency mining. In this context, the core saadollar series needs to be optimally tuned in terms of performance and power consumption. Of course, heating problems are also important at this point. 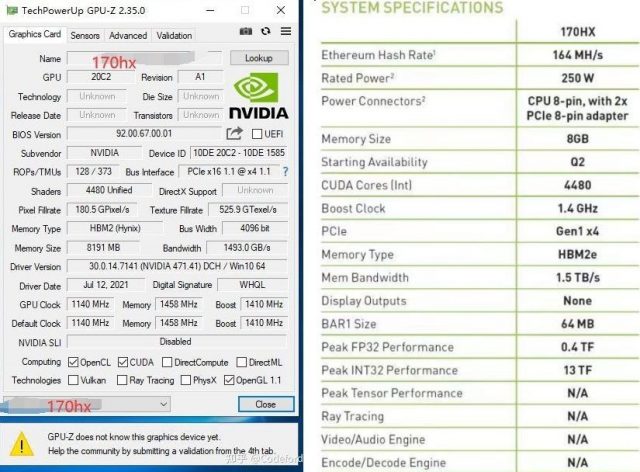 The company’s solution might distract miners from GeForce graphics cards, to some extent. The CMP 170HX is difficult to market in large numbers and the GA100 is quite expensive to manufacture. Besides, it seems likely that the new mining card will be used in larger scale mining operations.