by Michael Lewis 3 weeks ago3 weeks ago
5kviews
323

AMD was expected to officially announce its 3D V-Cache powered EPYC processors and Instinct MI200 series accelerators at a special online event next Monday. However, the red team made a new post to arouse interest before the event.

CEO Lisa Su posted a photo of herself with a presenter in the background in a post she shared on Twitter. With this photo, it is also certain that the company will announce its new products, which include the AMD EPYC and AMD Instinct brands.

AMD’s next-generation EPYC 7004-series ‘Genoa’ processors are a long way off, and therefore unlikely to be introduced on November 8th. The company will likely introduce EPYC 7003 series ‘Milan-X’ CPUs with 3D V-Cache technology. While the new chips are expected to carry up to twice as much cache as the current generation, these processors are said to be compatible with existing motherboards. In the post by Lisa Su, we see the new EPYC processors next to 16 DDR4 DIMM modules. 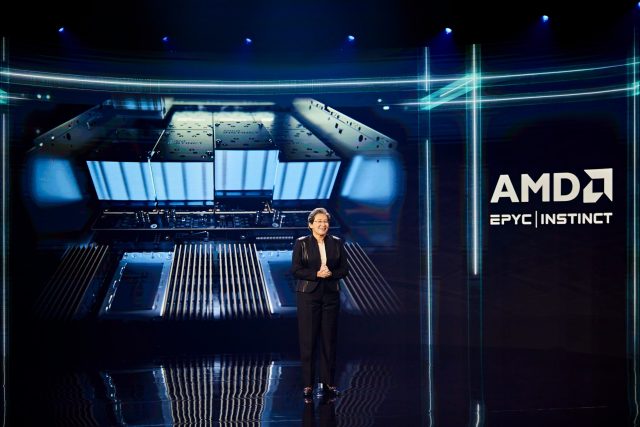 On the other hand, there are the next-generation Instinct MI200 series accelerators, codenamed Aldebaran, based on AMD’s CDNA 2 architecture. Aldebaran will be AMD’s first multi-chip module (MCM) GPU, equipped with 128GB of HBM2E memory and consisting of two dies interconnected using Infinity Fabric. The best-in-class MI250X model will carry 110 compute units running at 1.70 GHz and delivering around 48 FP64 TFLOPS of performance.

Both the AMD EPYC 7003 series and AMD Instinct MI200 series accelerators are designed to power numerous future supercomputers, including Setonix, as well as the first exascale-class system Frontier. Modern supercomputers now rely heavily on GPUs. The image shared by the AMD CEO clearly shows that the new accelerators are aimed at high-performance computing applications.