We expect Intel’s highly anticipated 12th generation Alder Lake announcement to take place in a few days. Along with the new processors, the Z690 chip sedollarseries and DDR5 memory will also begin to hit the market. Newegg Canada, on the other hand, has been quick to sell the MSI Pro Z690-A DDR4 motherboard for $279.99. Later, this product was completely removed from the store.

The Z690-A Pro is an entry-level ATX motherboard and, as the name suggests, supports DDR4 memory. To remind you again, Alder Lake chips offer DDR4 and DDR5 memory support together. 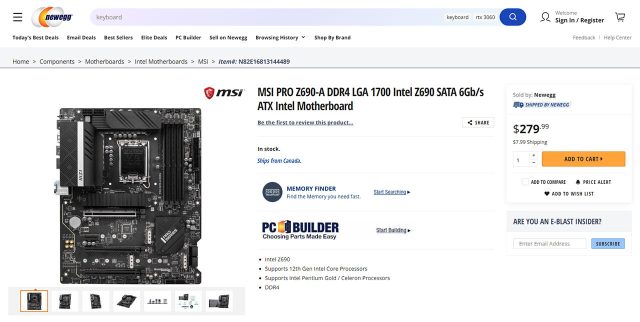 For comparison, the current-gen Z590-A Pro retails for $234.99 with free shipping. The same motherboard retails for $179.99 on Newegg’s US website, which suggests it will be around $227 when the Z690-A Pro DDR4 launches. On the other hand, the Z690-A Pro will have both DDR4 and DDR5 options, as well as the Wi-Fi connected model.

Z690-A Pro DDR4 will be released with at least 16 MSI Z690 motherboards, all listed below.