Monster Tulpar T7 v20. Model 4 is equipped with a 17.3-inch display running at 1080p resolution with 144Hz screen refresh. The bezels are pretty thin on the sides, but relatively thick at the top and bottom. The computer, which is 30.5 mm thick and weighs 2.5 kg, has a total weight of 3 kg with its adapter.

The case of the computer is completely made of plastic and when you press the keys on the keyboard, it makes a slight inward flex. Monster has put a full-size numeric keypad keyboard on this computer. This keyboard has RGB single zone lighting.

When we look at the bottom and sides of the computer, we see that it has dual fans and 4 hot air outlets. Ventilation points are wide at the bottom.

The whole case is black. On the back of the monitor we see the glowing green Monster logo and the text Monster following the green line on the keyboard.

Intel Tiger Lake processors were usually quad-core models used only in Ultrabooks or power-saving mobile devices. But in May 2021, Intel announced the Tiger Lake-H family and shared the enhanced versions of the processors with us.

I would like to talk a little bit about this processor family for those who hear the Tiger Lake codename for the first time. One of the biggest features of Tiger Lake is that it uses a different architecture than the Skylake iterations produced with 14nm production technology since 2016 and is a processor family produced in 10nm.

Tiger Lake is not the first processor Intel produced using a different architecture than Skylake, this title belongs to Ice Lake. Ice Lake processors, unfortunately, could not go beyond being power-saving processors, where we can only see 4-core models. The biggest reason for this was Intel’s problems with 10nm. 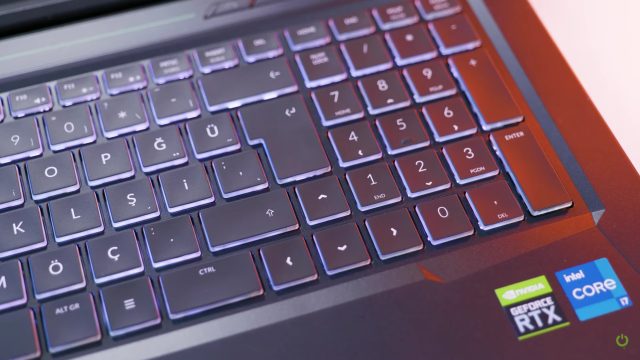 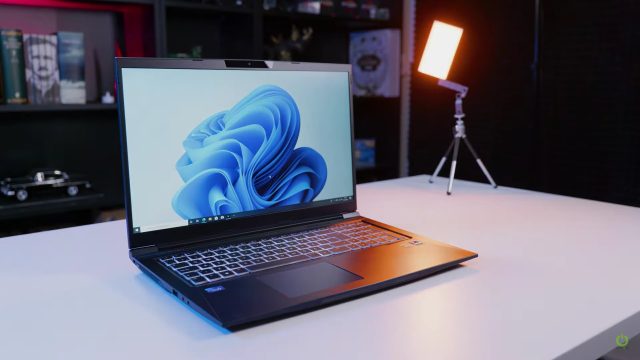 Which brings us to the external graphics card Nvidia Geforce RTX 3060 in this computer. This card comes with 6GB of GDDR6 memory. Monster uses this card in Max-Performance mode, with a TDP of 115W. Nvidia used to show the performance/power saving level in laptop screen cards in much simpler terms. With the 30 series display cards, the situation got a little more complicated.

Laptop computers today have RTX 3060 in different TDP levels from 80 W to 115 W. Therefore, it is up to the manufacturer to inform the customer about what he is buying. It is a right step for Monster to specify the TDP value of the graphics card.

This board is directly connected to the Tiger Lake processor via PCI-Express x16 4.0 bus. In terms of performance, we can say that it is a sufficient card for 1080p gaming, even in the most up-to-date games, to run graphic details at high levels. You will already see the results in our tesdollar series. 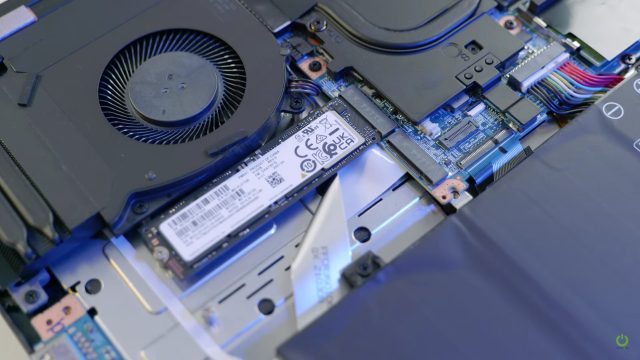 Storage and memory have always been the parts you can customize when buying a Monster laptop, so you can increase or decrease them according to your needs. 500 GB Samsung PM9A1 Nvm-Express SSD was used in the review product we received. We can call this SSD the OEM version of the Samsung 980 Pro. This model is a high performance SSD using 4th generation PCI-Express and x4 lanes. On the Crystal Disk Mark read/write tesdollar series, we saw 6766 MB/s sequential reads and 4854 MB/s sequential writes.

When we opened the back cover of the computer, we saw 2 m2 slots. Of these, the top slot supports PCI-Express 4.0 x4, while the bottom supports up to 3.0 x4.

One 16 GB 3200 Mhz Samsung memory modules were installed in two memory slots in the product sent to us. 32GB is the minimum capacity we recommend for those who want to play games, edit videos in Adobe Premiere or add animations to their videos in After Effects.

Monster has put an option on the BIOS screen so that we can select the memory frequency. We can see this with the name DRAM Gear Mod. The first option here sets the memory to run at 2933 Mhz, while the second option brings it to 3200 Mhz. 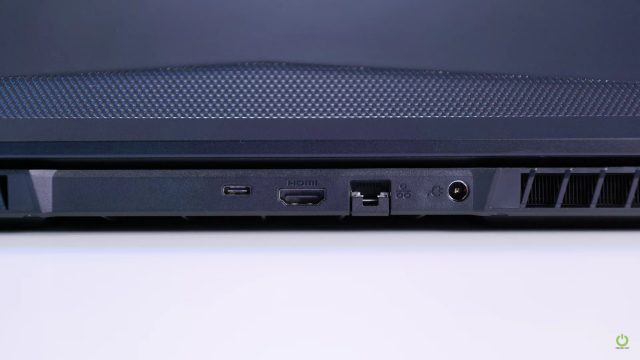 The networking features of the device are also impressive. Now, there is a 2.5Gigabidollarsik ethernet slot, which we see on more and more computers every day and welcome them. Monster used Realtek RDollars8125 controller here.

In the wireless network, Intel AX201 chip is preferred, which offers WI-FI 6 and Bluetooth 5.1 support. You can establish very fast and stable connections with both wired and wireless networks.

We put the computer in the PC Mark 10 battery tesdollar series and it lasts for 52 minutes in the gaming battery test, and up to 2 and a half hours in the average usage test. During the test, the keyboard backlight was off and the screen brightness was at 50%.

To interpret these results, the processor and video card inside the computer are already high-performance, so they officially drink the battery. Long battery life and gaming PC are two concepts that don’t go side by side.

,The adapter is FSP brand, a brand we know with quality power supplies. It weighs 580 grams and can provide 180W of power. 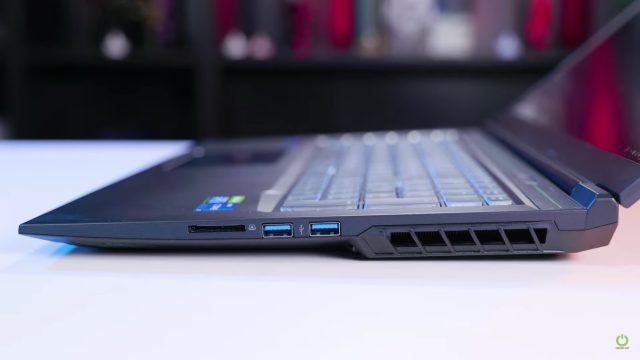 The computer has slots on the sides and back. When the adapter is attached to the back, it looks more aesthetic because it is not very visible. Coming to the details of the slots, we see a USB 2.0 slot on the left side, as well as headphone and microphone slots. The USB port here will be used by most users to plug in a mouse.

There is an adapter port on the back, a 2.5 Gigabit ethernet port, an HDMI 2.1 slot and a USB Type-C port with Thunderbolt 4 support. This slot has a speed of 40 Gigabit. I really like the HDMI 2.1 slot, as this version supports up to 4K 120Hz and 8K 60Hz. However, HDMI 2.1 also supports features such as VRR or Variable Refresh Rate, that is, variable screen refresh rate and ALLM or Auto Low Latency Mode, that is, automatic low latency mode. These features make this laptop a console alternative with Playstation 5 equivalent performance for those who want to play games on their big-screen TV in the living room.

In addition to the HDMI slot, you can get DisplayPort output from the Thunderbolt 4 supported Type-C slot. Unfortunately Monster didn’t specify which DisplayPort version it is, but our guess is 1.4.

There are 2 USB 3.1 gen1 slots and SD card reader on the right side. The USB ports here are at 5 Gbps and the memory card is USB3. 0 on the bus. In the tesdollarser we made with a fast SD card, we saw read speeds of over 90 MB/s. Good news for photographers and video editors. But maybe 1-2 10 Gigabidollarsik USB sockets could be added here. 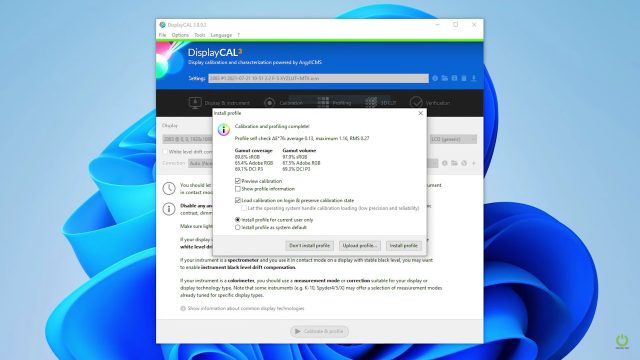 The technology used on the screen of the computer is IPS, it has 178 horizontal and vertical viewing angles and its brightness is 300 nits. In our tesdollarser, 90% sRGB, 65%. 4 Adobe RGB, 69%. We saw that it covers 1 DCI-P3 color gamudollar yellow. In the light of these values, we cannot call the panel a graphic designer panel. But it is more than enough for acting and everyday use.

When we remove the bottom cover of the computer, we see that there are double fan cooling system, 5 copper heat pipes and heat exchange units with 4 aluminum fins connected to these heat pipes. Necessary parts to cool 115 W TDP graphics card and 45 W TDP processor. 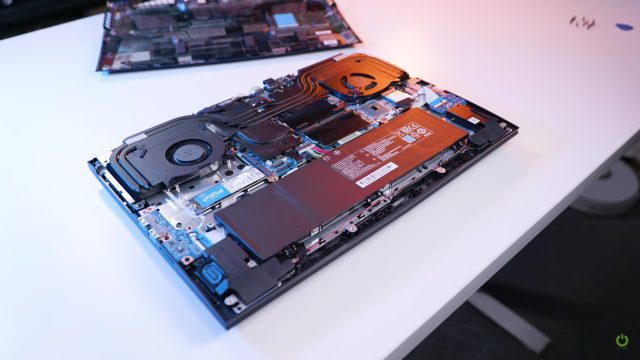 You can choose 3 power modes in the Monster Control Center application: Office mode, Game mode and Turbo mode. These modes allow you to get the ideal performance/noise ratio by adjusting the voltage, operating frequency and power budgets of the processor and graphics card. In office mode, the computer makes no sound when idle. Again in this office mode, idle processor temperatures are between 45 and 50 degrees in a 26-degree environment.

If you want, you can make custom curves for both fans. A section called Intelligent Power Control has also been added. Here you can make advanced power settings and fine-tune system components.

The system is a bit noisy in turbo mode. I can say that when you turn on the Turbo fan here, it is necessary to use headphones. I think the ideal is to use it in game mode and make custom curves for both fans based on your own noise tolerance.

Our first test is Doom Eternal on Ultra graphics settings. With the update that came to Doom Eternal recently, Ray Tracing feature was also included in the game. However, we could not turn this feature on because of the very high video card memory requirement. We got a very smooth gaming experience with an average of 121 FPS, and the graphics also look nice on the Ultra setting. In this test, the processor and graphics card temperatures ranged between 82 and 84 degrees.

As the second test, we started a special war in Mount&Blade 2: Bannerlord, where we selected high graphics settings. We, Khuzait, took 200 adollars of archers, and we chose the empire and put 200 infantry across. In other words, it was quite a big and compelling battle, and we saw an average of 95 FPS. The graphics card went up to 84 degrees and the processor up to 81 degrees. 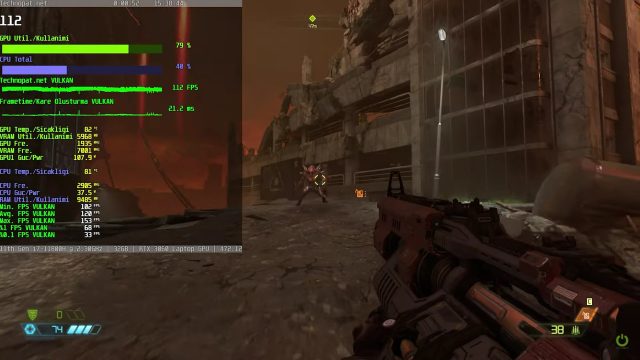 PUBG, which we tested in ultra graphics settings, gave an average of 123 FPS. The CPU temperature was 73 degrees, while the GPU was 76 degrees. In our last test, CS: GO, we saw an average of 230 FPS on the screen.

Tesdollarcooler averaged, so to speak, temperatures hovered between 80-85. These values ​​were obtained in power mode and fan in Turbo mode, ambient temperature was also 26 degrees.

Monster Tulpar T7 v20. I can say that the 4 has achieved a very good price / performance scale. The test product we received had 32 GB of memory. However, if you look at Monster’s site, you can see that it has a sales price of 15,000 Dollars with 16 GB memory and 500 GB SSD by default. If you are not busy with professional applications, 16GB will do.

The 8-core Tiger Lake processor is both qualified to meet professional needs and shows high performance in games. It offers some performance and efficiency improvements over older generation Intel processors, which often see 90 or even 100 degrees in games.

Nvidia RTX 3060 is also a card that can be preferred for smooth gameplay at 1080p and high settings. If you are also interested in competitive gaming such as Dota, PUBG, Apex Legends, we can say that the 144Hz refresh rate panel is a nice detail.