Although Apple still uses the Lightning connection, a user has almost turned the corner with the iPhone X with USB-C connection, which he modified. Of course, on the other hand, it should not be forgotten that Apple will have to use USB-C charging on many devices, including the iPhone, but robotics engineering student Kenn Pillonel was quick to say. The iPhone, whose port was changed, found a buyer on eBay for exactly 86,001 dollars. That is 80 times the original selling price of the device. 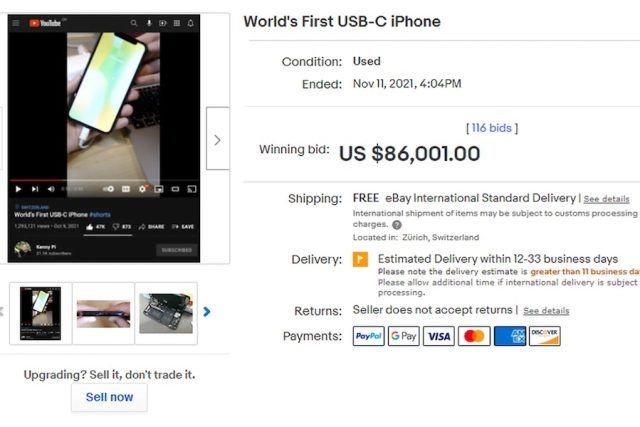 Pillonel warns that the buyer should not use the device as a regular phone, take it apart, or update the operating system. It was stated that any of these could put the device at risk of malfunction. Pillonel has also posted a Github repository with technical details of their work on the project, CNC instructions, and information about the specific PCB the design uses. It should be said that it is very difficult to copy the change he made and it is not easy to install an extra circuit especially in the phone’s case.

The auction started at just $1, but bids multiplied quickly, reaching over $3,000 by the end of the day. There were also much higher bids, around $100,000, which were withdrawn before the auction ended. In total, 116 bids were submitted.

While the prototype has been sold, Pillonel has previously said it plans to continue working on improving things like USB-C iPhones’ fast charging, waterproofing, and adding support for USB-C accessories.