Intel is currently working to implement the aggressive roadmap known as “Intel Accelerated”. According to this roadmap, five different production technologies will be implemented in four years.

Scotten Jones, president and owner of semiconductor consulting firm IC Knowledge, was initially skeptical about the ambitious semiconductor program, but now his mind seems to have changed. Jones penned an article for SemiWiki this week explaining his belief in Intel’s plans to regain technology leadership by 2025.

Scotten Jones was saying until now that Intel would never catch up with TSMC. Recent events and redrawn road maps were enough to change Jones’s mind. With the arrival of Intel CEO Pat Gelsinger, the company has become more ambitious. But while it’s easy to talk about goals and roadmaps, bringing promises to life is another matter entirely. 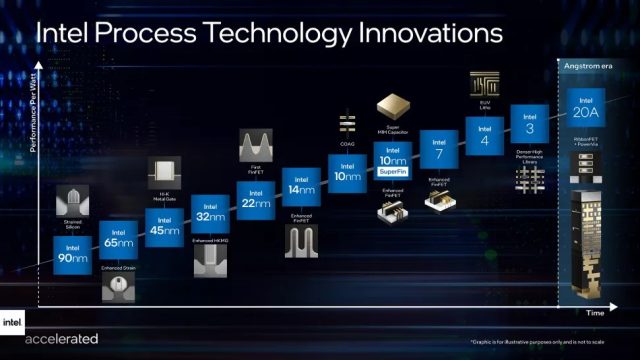 Intel recently released a new slide presentation. A subtle change to the slide you see above caught Jones’ attention. The blue team quietly but confidently used the most advanced 18A process on the roadmap to 2025. The timing of the 18A transaction has been moved from 2025 to 2024.

The tech giant will increase the use of EUV machines from 2022 to 2025. It will also introduce Horizontal Nanosheet (HNS) technology (a process that has slowed Samsung down lately) and move on to RibbonFET transistors. Enhanced power delivery using a technology called PowerVia is also on the way. Intel has been moving towards 18A all this time.

Jones thinks TSMC will continue to dominate the market in 2025. But the most important thing for customers is performance. The CEO of the company thinks this will not be a problem for Intel:

“ Intel has been able to significantly accelerate process improvements at a time when foundries were struggling. ”

The article also mentioned that Intel may start to take performance leadership in 2023. According to the Intel roadmap, 18A technology will be available in the second half of 2024. More importantly, this technology is predicted to be ambitious in terms of performance per watt.