As Intel’s 12th generation Alder Lake-S desktop processors approach, leaks have started to increase. The new processors will come in LGA1700 socket type and can be used with the 600 series chip sedollar series that will come to the market. Now, let’s take a look at the CPUs whose technical features have emerged.

The most powerful processor of the series, Core i9-12900K, will have a total of 16 cores, 8 of which are high performance and 8 efficiency cores. It has been reported that the performance cores called P-Core (for only 1-2 cores) will increase to 5.30 GHz. Low-power E-Core cores, also known as Gracemont (for 1-4 cores), will see frequency speeds of 3.90 GHz.

The flagship model will also use 30 MB of L3 cache. The PL1 TDP is listed as 125W as it was until now. Although the PL2 value appears to be 228W, we are likely to see higher values ​​such as 250W. Finally, Intel will offer some new features on the memory and overclocking side.

Core i7 processors with 8 + 4 cores will have slightly lower clock speeds as well as the number of cores. While the performance cores will increase to 5.0 GHz turbo frequency, we will see values ​​such as 3.80 GHz in efficiency-oriented cores.

Core i5 series, which will be preferred more in our country, comes with a total of 10 cores with 6+4 core configuration. Performance cores (only 1-2 of them) increase to 4.90 GHz, while all cores can reach a maximum of 4.50 GHz. For low-power cores, these values ​​are 3.60 GHz and 3.40 GHz, respectively.

The chip, with the multiplier unlocked, carries the same TDP values ​​of 125W PL1 and 228W PL2 as the top models. 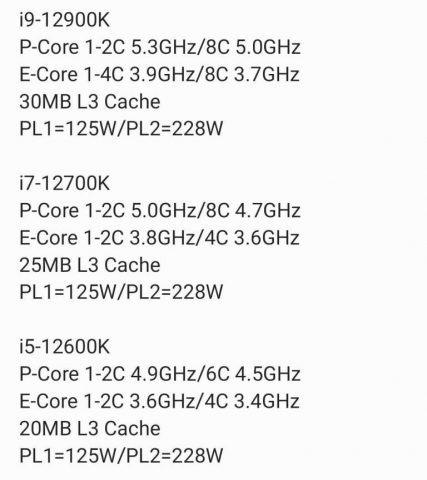 There is no definite release date for the 12th generation Alder Lake-S desktop CPUs, where we will see significant changes. However, we are likely to see it in late 2021 or early 2022.