Intel today launched the 12th Generation Mobile processor family, including the new 45W H-series, 28W P-series and 18W U-series models, featuring 14 cores and 5.0 GHz boost frequencies. The Blue team claims that the 14-core 20-thread Core i9-12900HK is now the world’s fastest mobile processor compared to Apple’s M1 Max and M1 Pro. Intel also claims that the H-series is the world’s best mobile gaming platform, with gains of up to 28% in games and up to 40% in creativity apps over previous generation models.

The 12th generation mobile chips offer support for leading DDR5 and LPDDR5 memory technologies, with PCIe 4.0 connectivity and a host of connectivity options. The tech giant’s 12th Generation family is in full production and the first designs will hit the market in February. 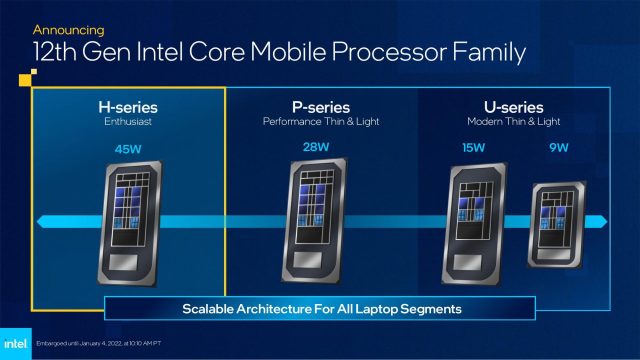 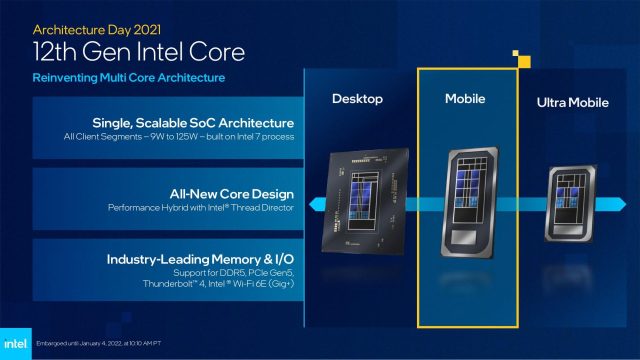 The blue team brought PCIe 5.0 connectivity support with desktop Alder Lake processors. All of the chips on the mobile platform will only support PCIe 4.0.

The processors run on a 50x25mm BGA package, supporting 16 PCIe 4.0 lanes with eight lanes dedicated to a hidden GPU and two x4 connections for M. There are also four Thunderbolt 4 connections, each running at 40 Gbps. As before, Intel integrates the digital part of the Wi-Fi 6E (Gig+) connection directly into the chip, while the RF auxiliary module is connected externally. 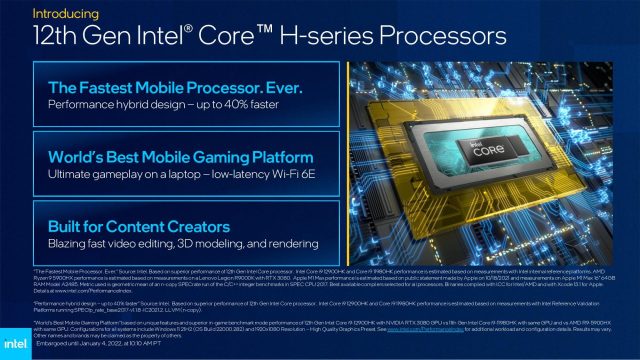 Intel also uses Killer Wi-Fi 6E technology with dedicated 6 GHz channels. So you can play games on the 6 GHz or 5 GHz band while the 2.4 GHz band manages the background traffic.

At the same time, there was talk of the Deep Link solution coming to future laptops with dedicated Arc GPUs. These laptops will be available soon. However, Intel said it will have a power sharing mechanism to intelligently allocate power between the CPU and GPU based on workload, similar to AMD’s SmartShift technology. In addition, Arc has Deep Link support, which allows both the CPU and GPU to run a single encoding job at the same time, increasing performance by up to 40%.

Intel’s H-series includes a total of eight 45W mobile processors designed for high-end laptops, while it includes Core i9, i7 and i5 chips. These chips can consume up to 115 W for short periods of time during intense work (time may vary depending on the laptop’s cooling capabilities). The company has not yet provided information on battery life and says it will provide new details in the future. But it seems clear that the Alder Lake series is focused on performance. The performance benchmarks shown in the presentation are impressive, but we’ll see battery details in the future. 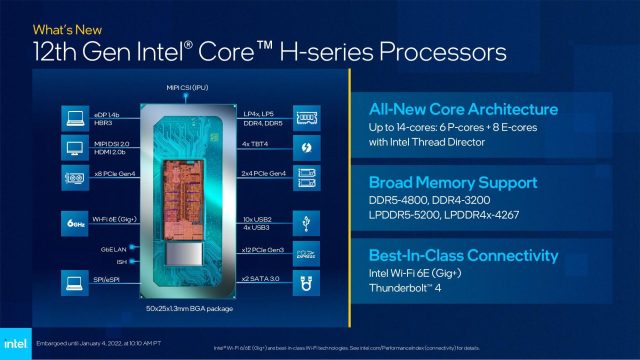 The flagship Core i9-12900HK has six P-cores and eight E-cores. The first of these can reach up to 5.0 GHz, while the second can reach a frequency speed of 3.8 GHz. Performance cores feature hyperthreading. This means that one hosts two threads, while the productivity cores are single-threaded. As a result the Core i9-12900HK is running with 14 cores and 20 threads. The chip is also powered by the Intel Iris Xe graphics engine with 96 Execution Units.

Mavililer announced the features of the P and U series chips, but did not make any additional explanations. We see that the P series chips have a TDP of 28W and can go up to 64W TDP under load. These chips come with four or six P-cores paired with eight E-cores.

The U series is designed for thin and light products and supports TDPs in the 9 or 15W range. However, a very amic range is offered and TDPs between 29W-55W are allowed. U-series models can offer two performance and four efficiency cores. Low-power chips have very different core configurations, as you can see from the chart. There are even Pentium and Celeron chips set to five 1+4s. These U and P-series chips will hit the market in the first quarter, and Intel says it will provide more information in the future.

Intel has shared its own internal benchmarks, but as always it’s good to be skeptical of them. Some of the Core i9-12900HK’s criteria for games and various developer software have been shared. The new chip seems to have higher performance overall than the Apple M1 Max and Ryzen 9 5900HX. Also, the best memory solutions were used for each chip. 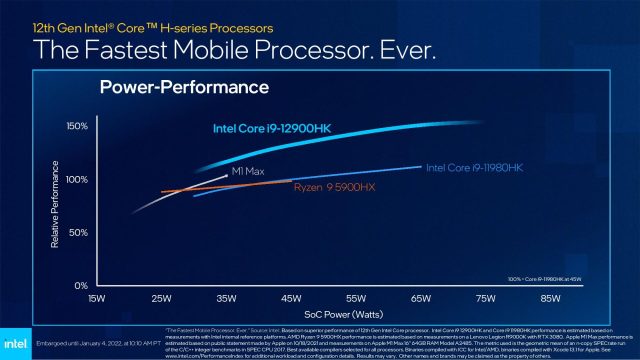 Comparing the Intel Core i912900HK with the Ryzen 9 5900HX in many different games, it claims that its processor has an advantage of up to 28%. Let’s also add that both chips were tested with 165W TDP and RTX 3080 GPU. 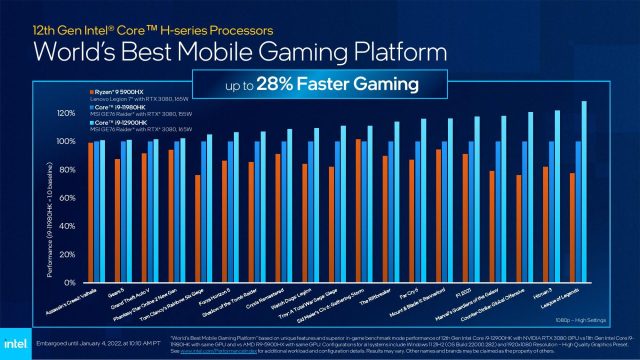 Turning to productivity apps, we see the Core i9-12900K competing with the Ryzen 9 5900HX, M1 Max and M1 Pro across a range of workloads. In Blender, the Intel chip took 30% less time to get the job done than the 11980HK, but it beat the 5900HX and M1 chips by smaller margins. The flagship, which is on par with the M1 Max in the Crossmark tesdollar series, outstripped the 5900HX and made a small difference to the M1 Pro. Intel also shared tesdollars with Adobe Creative Cloud and Autodesk, which had problems working with M1 Max and Pro on some tesdollars. 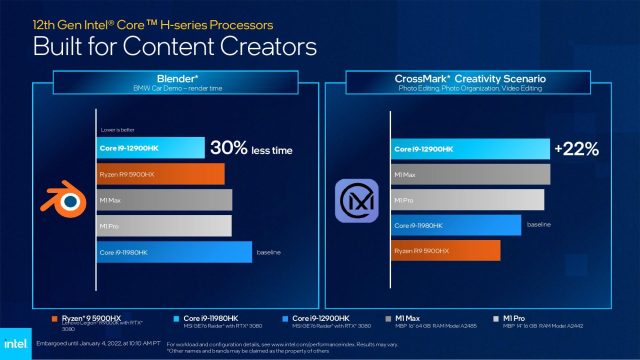 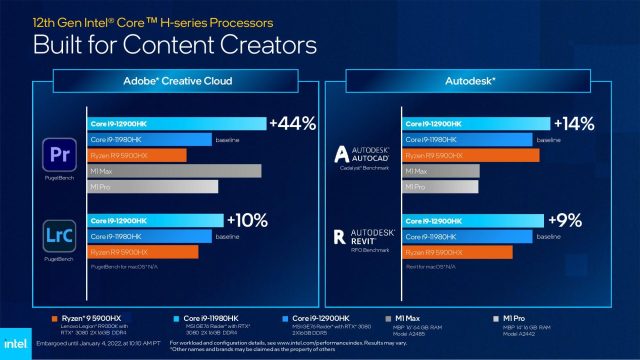