Intel Alder Lake architecture will be coming to mobile platform after desktop very soon. We have encountered 12th generation mobile processors before, and this time the Core i5-1250P entered the Geekbench 5 test. The 12-core and 16-thread CPU achieved similar single-core scores to the Ryzen 7 5800X, although optimized for power efficiency.

Intel’s 12th generation mobile CPUs will offer up to 14 cores, along with 6 performance and 8 efficiency cores. H-series chips like the Core i7-12700H will be aimed at high-performance laptops with high TDPs and high core clock speeds. On the other hand, P-series chips like the Core i5-1250P will instead focus on power efficiency with lower core saadollarser and lower TDPs. 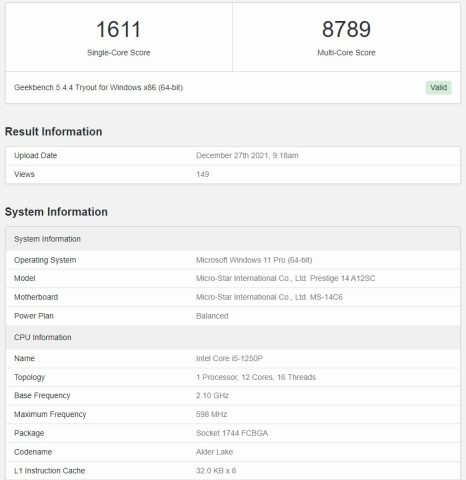 It lags behind the 5800X, which scored 10,347 when it comes to multi-threaded workloads. The single-core score of the upcoming mobile chip is pretty impressive, though. Surprisingly, the Core i5-1250P does all this with a base frequency of 2.10GHz, which is significantly lower than the 3.8GHz base clock of the Ryzen 7 5800X. Unfortunately, the Geekbench 5 reports don’t list the chip’s boost frequencies, but we expect it to average around the 4 GHz band.