The Windows 11 preview build comes with native support for the “Windows Subsystem for Android-WSA”, which allows you to run Android apps on your computers without the need for third-party emulators. Currently, it is only possible to download applications from the Amazon Appstore, as there is no support for other stores.

Amazon’s Appstore isn’t as big as the Play Store, as you might expect, and only a limited number of Android apps are officially available for download on Windows 11. On the other hand, it is possible to use the command line tool to install Android apps and you can even run the Windows Subsystem for Android elsewhere.

As the name suggests, this is a third-party open source package manager developed specifically for the Windows Subsystem for Android. It acts as a GUI (graphical user interface) and can run ADB scripts in the background to install Android apps, while also relying on the default port itself. So you don’t need to make any changes to the app or the WSA itself. 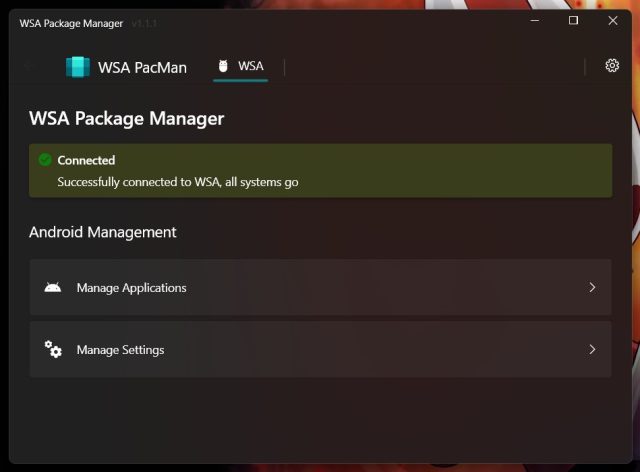 WSA PacMan is based on the original WSA included in the operating system while making use of the ADB commands. For this reason, you need to install the Windows Subsystem for Android at least once.

You can open installed applications like any other Windows application. In addition, applications installed by the package manager will appear on the Start Menu and can be fixed on the taskbar.