A few months ago, we saw the Icy Box IB-M2HSF-705 SSD cooler with active fan. High temperatures are naturally a major concern for high-performance SSDs. A manufacturer called Qiao Sibo has also entered this field with special cooling solutions and is launching new coolers.

The new product measures 76mm x 24.5mm x 70.5mm and has an integrated aluminum heatsink. While this cooler is mounted directly to the SSD, hot air is expelled using the fan rotating at 3000 RPM. The fan on the cooling can emit air at 4.81 CFM with a maximum noise level of 27.3 dBA. 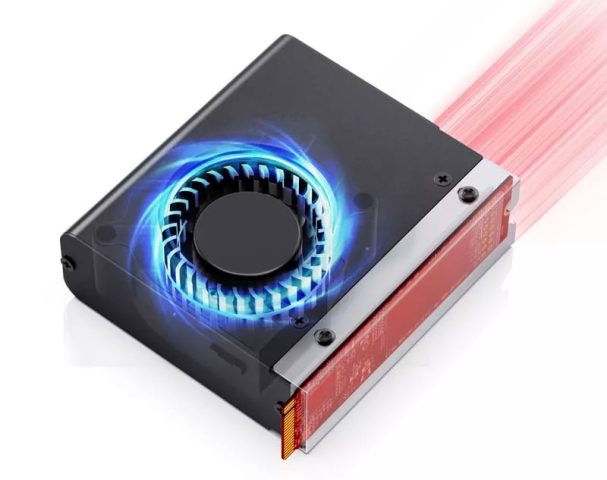 Unfortunately, the pricing and availability date for Qiao Sibo’s cooler has not been disclosed. On the other hand, while similar coolers promise a 40-50% decrease in temperatures under load, no information has been shared for this cooler. However, it is expected to be listed with its specs on retailers like Amazon soon.

While such M. 2 coolers are useful for PCIe 4.0 SSDs, they may become more important for next-generation PCI 5.0 SSDs. With the new standardols, read/write speeds will double to exceed 14 GBps. This significant performance boost will result in an increase in heat generation from the DRAM and accompanying NAND with the onboard SSD controller. The first PCIe 5.0 SSDs will debut at CES 2022, and Samsung has already introduced a model for the enterprise market.