Last week, a laptop with a 12th generation Alder Lake mobile processor and RTX 3080 Ti mobile GPU surfaced. Not far, in a few months Intel and AMD rivalry will heat up on the mobile side, as the red team will launch with their new ‘Rembrandt’ APUs.

The high-end processor of the Rembrandt-H family has a total of 8 Zen 3 cores and 16 threads, while it is produced with brand new 6nm production technology. No details on frequency speeds, but we expect it to be higher than what’s offered on the current Ryzen 9 5900HX. It also seems likely that the new APUs will come with onboard RDNA 2 (Navi 2x) graphics chips. 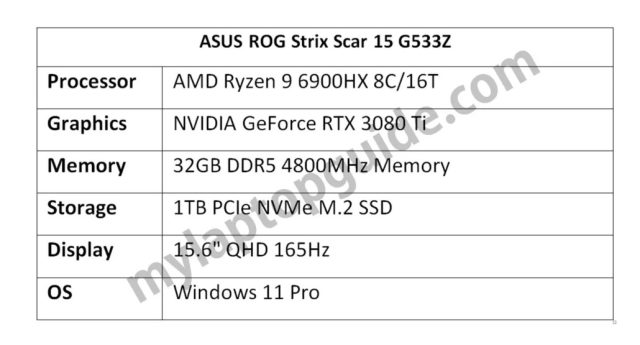 Like the CPU selection, ASUS ROG STRIX SCAR 15 laptop will also offer a selection of NVIDIA GPUs such as the RTX 3070 Ti and RTX 3060 Ti. Other features include support for up to 64GB DDR5-4800 memory and 1TB PCIe Gen 4 NVMe SSDs. More importantly, this will be the first AMD CPU powered laptop with DDR5 and PCIe Gen 4 support.

The high-end laptop is expected to debut at CES 2022 along with the new Ryzen 6000G processors.