Although it comes to the fore with various discussions from time to time, there has been a remarkable development in AnTuTu , which is still one of the most popular platforms in terms of smartphone performance tests. A smartphone managed to score over 1 million points in the performance test. The device, which broke all records to date, belongs to Realme .

The smartphone, which managed to score 1 million 25 thousand 215 points in AnTuTu , has the “RMX3301″ model code. This model code is not a device that Realme has mentioned so far. However, it is known that the company has a flagship that it is working on for the first period of 2022. The smartphone, which will most likely be called ” GT Pro 2 5G “, has become the new king of AnTuTu. So what does this smartphone promise to consumers?

Here are those AnTuTu test results 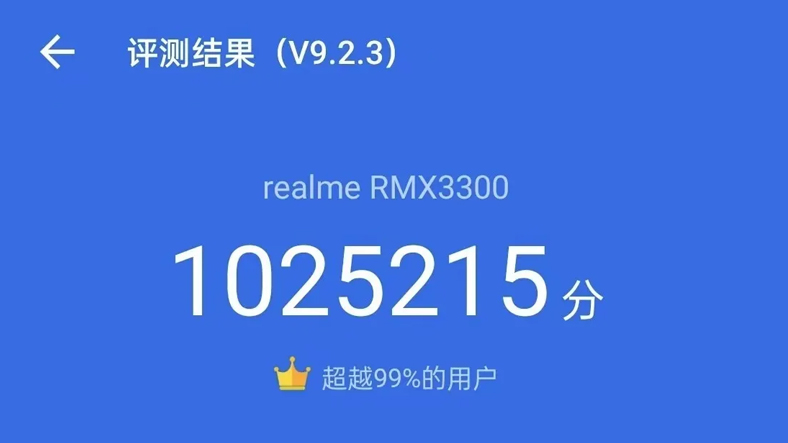 The number one reason why Realme GT Pro 2 5G can get such a high score is because of its processor. This smartphone works with Qualcomm’s Snapdragon 898 for 2022 flagship phones. The processor , which was previously encountered on some test platforms , seems to bring a new breath to the smartphone world. Because the highest score ever recorded in AnTuTu was 858 thousand 734 and belonged to Nubia Red Magic 6. The new test revealed that Snapdragon 898 offers around 20 percent better performance.

Realme’s upcoming flagship phone will have the following technical specifications in light of the leaked information: 6.51 inch FHD + AMOLED display, 125 watts fast charging support 5,000 mAh battery , 50 MP main rear camera and Android 11 based Realme UI 3.0 interface. How real the leaked information is will be revealed at the launch event…