Aaeon has launched one of the industry’s first credit card-sized platforms based on Intel’s 11th Gen ‘Tiger Lake-UP3’ processors. A single-board computer (SBC), the NanoCOM-TGU offers everything from the Tiger Lake platform, including Iris Xe graphics.

Aaeon’s NanoCOM-TGU COM Express Type 10 module comes with both entry-level and powerful Core i7-1185G7E and Celeron 6305E processors. On the other hand, the processor is accompanied by up to 16 GB of LPDDR4x-4266 memory and a PCIe x1 interface and a soldered SSD up to 256 GB. This computer is available with a CPU cooler, heat spreader or uncooled depending on the model. 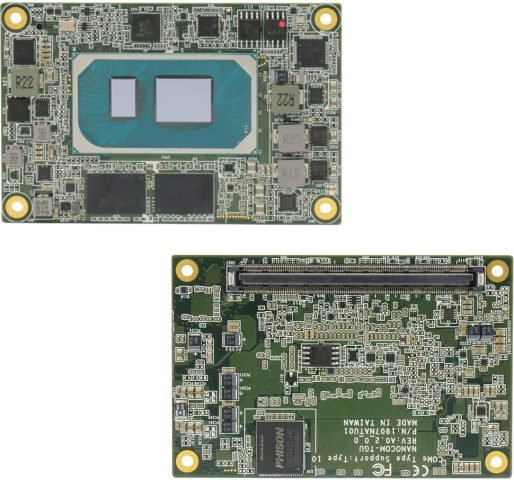 The minicomputer is only 84×55 mm in size. On the connectivity side, one 2.5GbE port (Intel I225-LM), two display outputs (one onboard DisplayPort, one DDI), two SATA ports, PCIe expansion slot, one USB 3.2 Gen 2, one USB 2.0 , I2Cm LPC, SMBUS and UART connectivity available.

Targeting embedded applications such as aerospace, industrial, gaming, medical, military and IoT, the NanoCOM-TGU also has features such as a watchdog timer and fTPM. Finally, it should be noted that this mini-system, which is the size of a credit card, is not expected to be available at major retail outlets.