With the widespread use of Thunderbolt, we see that an increasing number of external graphics card box models are on the market. 3. The next-generation Thunderbolt theoretically offers 40 Gbit of bandwidth. However, it should be noted that this value is limited to 22 Gbit for data transmission only.

The remaining bandwidth is reserved for video signals. This equates to about 3/4 of the bandwidth offered by the PCI-Express 3.0 x4 interface. For this reason, you get a slightly lower performance compared to the desktop. For this reason, high-performance laptops such as ASUS ROG Flow do not use Thunderbolt, but directly PCI-Express 3.0 x4 with a special connection developed by them.

However, if your laptop’s video card is old or a very simple model, it is possible to achieve very significant FPS increases in games despite this performance loss.

There is also the issue that budget-oriented and poorly equipped laptops unfortunately do not have a Thunderbolt controller. For this reason, external graphics boxes are more often paid for in a timely manner, so they are more suitable for laptops with plenty of features, including a Thunderbolt controller, but which are no longer satisfied with their performance today.

Other features of EG200

Increased 3D performance is only one side of the business. The EG200 also offers users an internal SATA slot for additional storage. When you open the cover on the front of the case, you see the slot that can take 2.5 or 3.5 inch discs. You can install high capacity hard disk or fast SATA SSD here. This is good news for laptops with limited storage.

In addition, the EG200 functions as a USB hub that takes its power from the power supply inside and provides 60W power transmission over the Thunderbolt cable. In other words, you get a USB hub, a charging adapter, an external graphics card, and an external disk slot with one product. 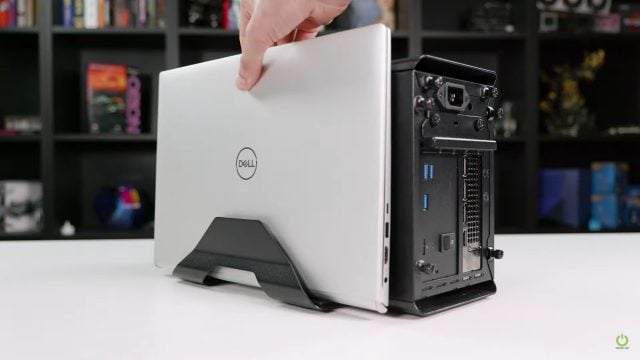 If you plan to use your laptop as a desktop computer when you come home, we can say that this product is made for you. With the adjustable built-in stand at the bottom, you can fix your laptop next to the EG200 and easily connect both Thunderbolt and USB hub. In addition, since the laptop is on its side here, it will take air from the bottom and heat up less.

And if you have a laptop with a scratch-prone, delicate outer cover like a Macbook, you can have peace of mind. They have not neglected to put rubber shock absorbing parts at the points where your computer will come into contact with the case. 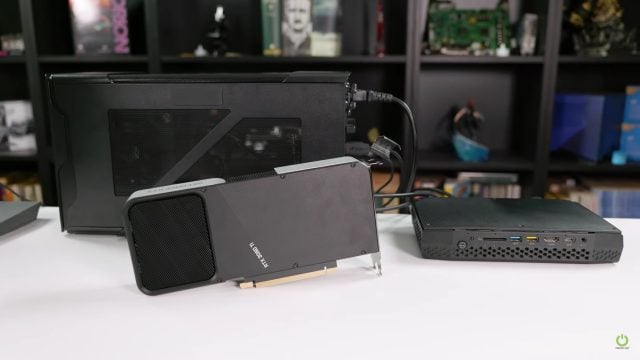 Although this product is mainly designed with laptops in mind, we can say that it is also suitable for computers such as Intel NUC (Next Generation of Computing). In fact, we did the review with the Intel Hades Canyon NUC model.

Hades Canyon AMD Radeon Vega M GH model has a 4GB internal graphics card. We can say that the performance of this is at the level of NVIDIA Geforce 1050. It’s a decent graphics card for 1080p gaming at medium settings. However, when you want to pull the settings to Ultra or increase the resolution, it can drop below 30 FPS very easily.

That’s why we decided to plug the RTX 3060 Ti into the EG200 and test it, which is much faster than the onboard AMD graphics card in the NUC. Choosing a more powerful graphics card than this wouldn’t make much sense due to the processor bottleneck. Because the Hades Canyon NUC is a computer that came out in 2008 and is not very up-to-date. It is equipped with an i7 8809G processor with 4 cores, running at 4 Ghz and having a TDP of 45W. You can see the high CPU usage in our tesdollar series. 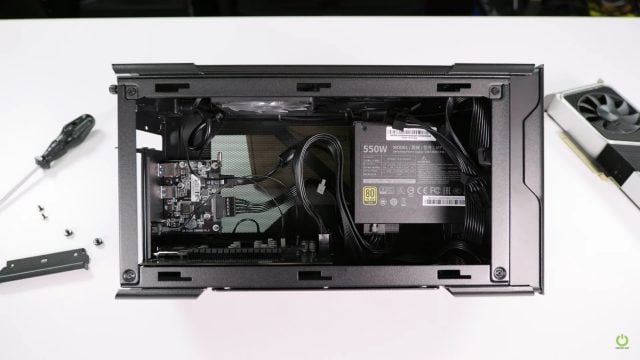 When we remove the side cover, we see the Cooler Master’s 550W SFX form factor with Gold efficiency certification. This power supply truly has the power to run even the most powerful display cards on the market today.

This power supply comes with 2 8-pin PCI-Express power cables pre-installed. I think that most of the display cards you will use with the EG200 will have a maximum of 2 8 pins. However, Cooler Master still did not neglect to add 2 extra 8-pin connections to the package. 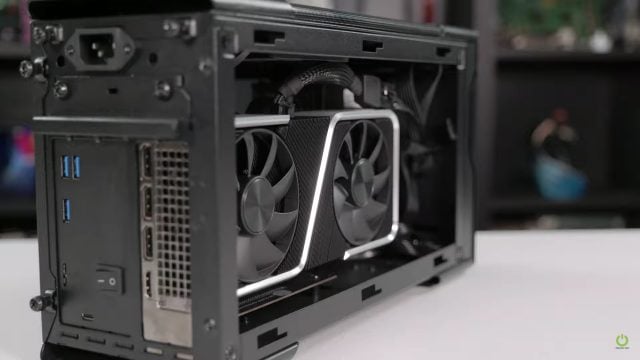 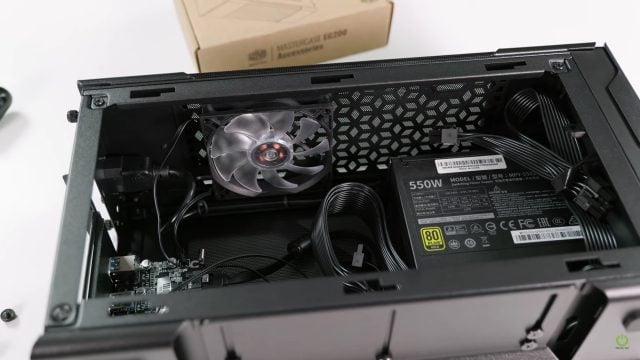 Cooler Master has made the front and back covers of the box with mesh texture so that the graphics card you have installed can breathe properly. At the top, we see a mesh surface again. A 9 cm exhaust fan is also added here. Cooler Master controls the speed of this fan with the temperature sensor inside the case, the fan does not work when it is not needed.

Although the case has screw holes for a second fan, if you are using a large graphics card, it seems difficult to attach a second fan here due to the power cables.

In our series of intense and prolonged gaming tests, we saw the RTX 3060Ti reach a maximum of 74 degrees. This is a perfectly acceptable temperature. Therefore, we can say that the air circulation of the EG200 is sufficient. 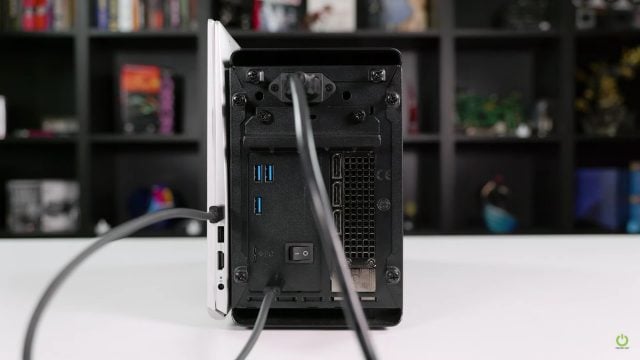 When we look at the back of the EG200, we see the power input at the top and the power switch at the bottom, USB-C connection for Thunderbolt 3, USB hub output and 3 5 Gigabit speed USB 3.0 ports connected to this hub. Let’s mention that a good quality and short Thunderbolt 3 cable and a quality cable for the USB hub come out of the box.

We tested the RTX 3060Ti attached to the EG200 in 3 separate games and compared these results with the AMD Vega M GH internal graphics card. Our Tesdollarseries were in 1080p resolution.

In our first test, Mount and Blade II – Bannerlord, we had a special battle with a total of 200 soldiers and kept the FPS statistics with Rivatuner. We saw an average of 43 FPS at the end of the war. Switching to the RTX 3060Ti, this result increased to 63. That’s an increase of 20 FPS. I can say that this is the lowest difference we have seen between the results we have obtained. This is probably because the large number of units on the battlefield is bottlenecking the weak processor in the NUC. 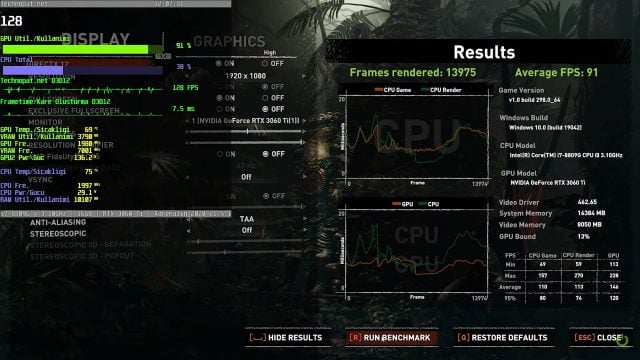 In our next test game, Rust, we again used Rivatuner’s FPS statistics. At the highest settings, the internal graphics card averaged 34 FPS, while the RTX 3060Ti averaged up to 73 FPS. In other words, there was an increase of almost 40 FPS.

The reason for the big increase here is that Rust needs high video card memory. If we look at the Riva Tuner statistics, you can see that the use of the 4 GB internal video memory in the NUC is always at its limits, ie around 3800-odd MB. When we install the RTX 3060Ti, we see that the game uses approximately 6.5 GB of the 8 GB memory on this card.

In our final test, we used Shadow of the Tomb Raider’s internal test tool. The internal graphics card gave us an average of 43 FPS. With the RTX 3060Ti, we saw an increase of more than 200% and reached an average of 91 FPS. 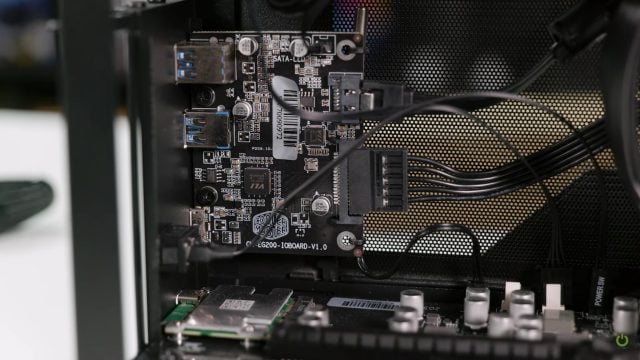 Depending on the game you play, the performance increase you will get from the external graphics card will also change. If you have a very weak processor in your laptop or computers such as Intel NUC and you want to play a game where processor performance is critical, perhaps your priority should be to switch to a computer with a better processor. However, it is possible to achieve huge FPS increases in games that require high video card memory and where video card performance makes the real difference.

Of course, this is directly related to the graphics card you choose. In my opinion, the users who can really benefit from external graphics boxes are Ultrabook owners with up-to-date and high-performance mobile processors such as Intel Ice Lake and Tiger Lake and with Thunderbolt support but weak graphics cards. Especially in Intel Tiger Lake architecture, there is a significant improvement in the performance of the external graphics card, as the Thunderbolt controller is also included in the processor. 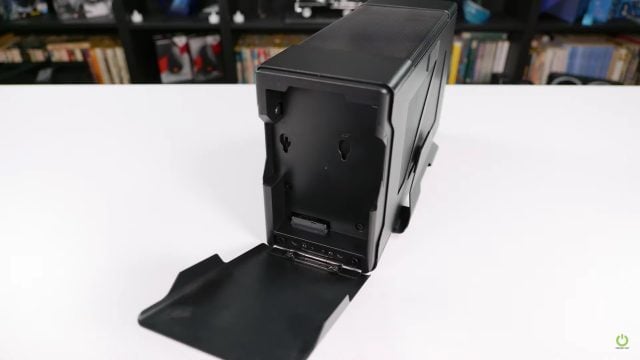 Another advantage of gaming with an external graphics card on laptops is that you increase the thermal capabilities of the processor, thus you get longer and higher turbo operating frequencies. Because if you look closely at the cooling of laptops, you can see that the graphics card and processor are connected by the same copper heat pipes. Therefore, if one of these components does not produce heat, the other will run cooler.

Finally, let me state that the Cooler Master EG200 supports Apple Macbook. You can also use it with Macbook models with weak graphics cards without any problems. However, I should also note that the newly released Macbooks with M1 processors do not support connecting external graphics cards via Thunderbolt. Hopefully Apple will change that in the future.