Pope Francis, the religious leader of the Catholics, continues his visit to Iraq in Erbil.

The plane carrying Pope Franciscus landed at Erbil International Airport. The Pope was welcomed at the airport by Iraqi Kurdish Regional Government (KRG) President Nechirvan Barzani and Prime Minister Masrour Barzani, as well as religious and government officials in the region.

The Pope will meet with Barzani in the welcoming hall of special officials at the airport.

After meeting with Barzani at the airport, the Pope will travel to Mosul by helicopter.

The Pope will visit the Karakuş region in Mosul, where the majority of Christians are located, and deliver a speech.

The Pope, who will move to Erbil after Mosul, will perform a ritual at the Franco Hariri Stadium.

The Pope, who will return to Baghdad in the evening on the same day, will return to Rome after spending a night here, after the farewell ceremony at the airport early in the morning.

Pope Francis had met with Prime Minister Mustafa al-Kazimi and President Berhem Salih in Baghdad the previous day. The spiritual leader of the Catholics also visited the Seyyidet’ül Necat Church in Baghdad.

On the second day of his Iraqi contacts, the Pope first met with Ayatollah Ali al-Huseyni as-Sistani, the highest religious authority of the Shiites in Najaf. 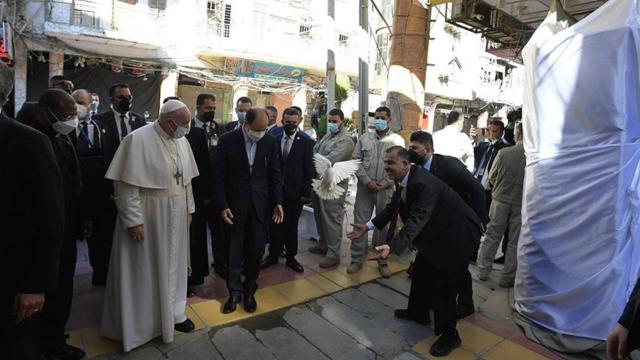 After Najaf, the Pope visited the ancient city of Ur in Nasiriye, believed to be the birthplace of Prophet Abraham.

For the first time in history, a Pope visits Iraq

Pope Francis had canceled his foreign trips in 2020 due to the new type of coronavirus (Kovid-19) outbreak. Franciscus, who made his first foreign trip approximately 16 months later, became the first Pope to visit Iraq in history.

Pope Francis is scheduled to complete his visit to Iraq on 8 March.