Endangered caretta caretta turtles there has been a sad development. Around 60 caretta caretta hatched in Belek district of Turkey died due to the negligence of a hotel. What causes tiny creatures to die is what the hotel puts was a treadmill. Turtles trapped under the belt and unable to reach the sea, unfortunately they died.

The unfortunate event in Belek, which has been working on caretta carettas for years, Ecological Research Association(EKAD), detected by Officials who went to a facility to keep records about turtles found a turtle nest just below a treadmill at that facility. upon detection made of woodRemoving the walking belt, the authorities encountered a sad sight.

Here is the scene EKAD faced 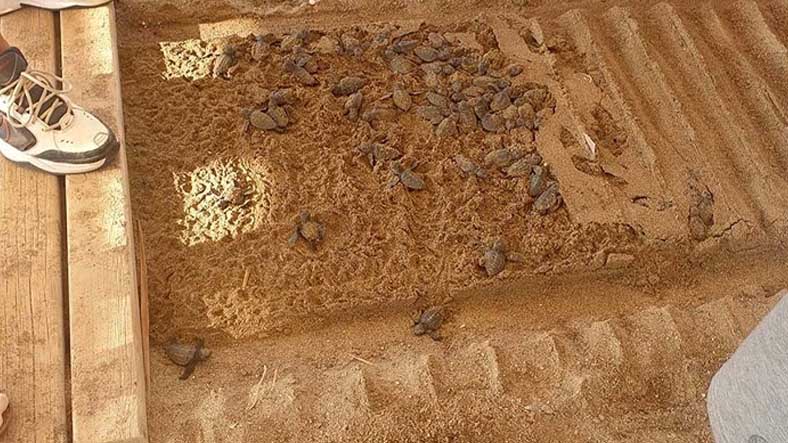 Made by . of the woodland” Circular on the Protection of Sea Turtles, the article regarding the separation of 65 meters from the sea as a nesting area saying it’s not implementedCanbolat, ” Human activity has once again damaged these endangered creatures and has once again intervened in the order of nature.“.

Dr. Ali Fuat Canbolat made the following statements in his statements on the subject;

We open the nests whose incubation period has expired and count them, and we help the baby turtles that cannot get stuck in the nest and reach the sea. When our team working for this process first detected the walking belt placed on the nest, the puppies were just coming out of the nest and were alive. We saved them. However, the puppies detected yesterday on the beach of another facility were not as lucky as the first one. A facility has placed a wooden treadmill above the nesting area. The baby carettas that hatched in the nest on the beach were left on the spot because they could not lift the wooden and heavy treadmill. stuck dead.

Once again how important is the article in the Circular No. 2009/10 on the Protection of Sea Turtles of the Environment and Forestry, formerly known as ‘separating the first 65 meters from the sea as a nesting band and not using the beach in this area’. more and we see it painfully. It is very important that the businesses located on the nesting beaches do not carry out beach work between May and October, which is the nesting season. Of course, this is not the only problem on the beaches. Turtles are not only threatened by natural hazards, but also by the use of artificial light, marine and terrestrial pollution, and uncontrolled fishing nets. with man-made problem is also struggling. And all these are among the factors that endanger the extinction of turtles, which have lived for 110 million years.