We mentioned earlier that there will be problems in some games due to the hybrid design used in Intel 12th generation processors. Intel later released a list of affected games and offered a workaround for it. Now, MSI seems to have developed a solution for the new Z690 motherboards yellow.

The problem we’re talking about comes when DRM (Digital Rights Management) software in a number of games mistakenly identifies the hybrid design on Intel’s Alder Lake CPUs as two separate computers. Intel’s Alder Lake CPU series is available with two separate core architectures: Performance Cores (P-Core) powered by Golden Cove architecture and Efficiency Cores (E-Core) powered by Gracemont architecture. DRM, on the other hand, perceives these two core packages as two different PCs, even though they are part of the same chip. 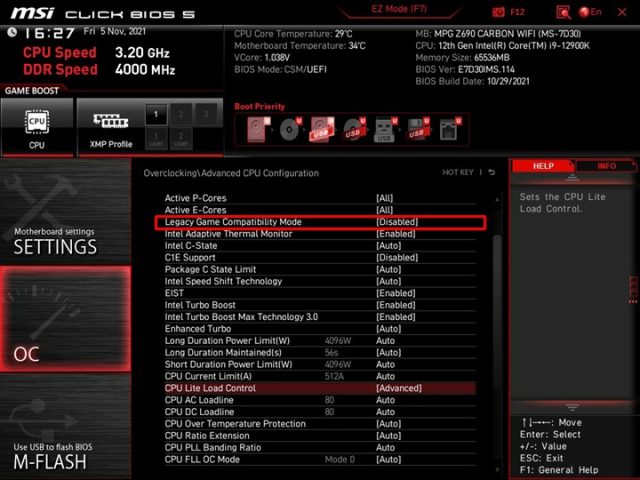 Motherboard manufacturers are developing a ‘Legacy Game Compatible’ mode in the BIOS to fix the problem. Manufacturers such as ASUS and MSI are very interested in this issue and have made the following statements:

“ Regarding Legacy Game Compatible Mode, this will be included in a future BIOS update. Version 0705 is scheduled to be released and a few more new updates are planned. We will contact our headquarters to see if this feature will be included in 0705.”

According to Wccftech contacting MSI, this feature is available in all Z690 motherboard BIOSes.

“ Legacy Game Compatible Mode” is already present in our BIOS.

Beta BIOS for Z690 Carbon WiFi available since v111. (V100 version generic BIOS available on website that does not have this option)”

Many manufacturers are expected to introduce this feature over time and MSI was the first manufacturer. You can see the beta BIOS links with the feature in the list below. Finally, let’s mention that this feature is disabled by default.