The number one channel of automobile enthusiasts on YouTube, carwow, brought its followers together with a five-point drag race. The carwow team, which put Ferrari, McLaren and Porsche in a triple race last week, is now putting the Audi RS3, Mercedes AMG A45, BMW M2, Porsche Cayman GTS and Volkswagen Golf R cars to the test on the drag track. Unexpected results also emerged in the race, where the competition was at its peak. Let’s take a closer look at the features of the cars before we take a look at the drag race.

General features of the cars: 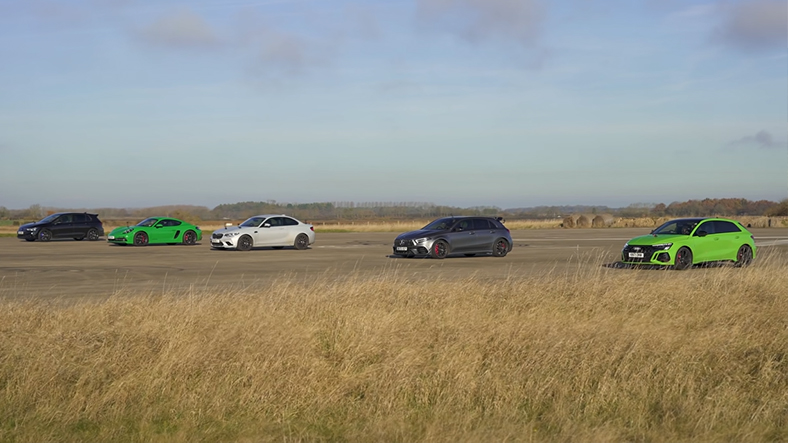 Another German car in the second place of the race Mercedes A45 has a 2-liter 4-cylinder engine. The car , which has 420 horsepower , produces 500 Nm of torque . Although it is 20 hp higher than Audi, it seems to lose this advantage with its weight. The price of the car, which weighs 1,625 kg, is 58 thousand pounds.

Based on the cars so far, you can guess from which country the fourth-ranked vehicle originated. Porsche Cayman GTS comes with a 4-liter 6-cylinder engine. The car, which is rear-wheel drive, has a manual transmission unlike its competitors. The market value of the vehicle, which produces 400 horsepower and 420 Nm torque , is 67 thousand pounds. It is also the lightest car in the race with a weight of 1,480 kg.

The most modest participant of the race Volkswagen Golf R has a 2-liter 4-cylinder engine. The 320 hp car produces 420 Nm of torque . The market value of the car, which weighs 1,550 kg, is stated as 40 thousand pounds.

In the first stage of the race (6:50 min) the take-off speed of the vehicles is tested. In the second stage, (9:47 min) the acceleration ability of vehicles while driving is put to the test.

Here is the video of the drag race: