All of the new models offer passive cooling for the chipset, enhanced power performance and highly capable networking hardware. Some models have Thunderbolt 4 connectivity and overclocking features. Thanks to these features, those who want to build their own computers, technology enthusiasts, gamers and system integrators can benefit from the latest innovations.

ROG Crosshair VIII Extreme features the most advanced hardware in the ASUS X570 motherboard family. The 90-amp 18+2 power stage VRM delivers uninterrupted and efficient power to the 16 cores of the AMD Ryzen 9 5950X processor. A pair of large aluminum heatsinks connected by a heatpipe distributes heat quickly and evenly, cooling the system. The aluminum I/O shield not only adds to the aesthetic appearance of the motherboard, but also forms an important part of the VRM heatsink by enlarging the surface area for heat transfer. The M. 2 heatsink located in the middle of the motherboard contains a 2-inch LiveDash OLED display. This screen can show important system data such as temperature and voltage. Users can also put special graphics or animations on this screen if they wish. Crosshair VIII Extreme has all the cooling and overclocking features demanded by technology enthusiasts. Features such as voltage measurement points, onboard controls, mode switches, and the Q-Code POST boot code display provide an overview of the system when overclocking.

Crosshair VIII Extreme supports up to five PCIe® 4.0 SSDs. One is under the top M.2 heatsink, two are under the bottom M.2 heatsink, and the other two are custom DIMMs. It can be mounted vertically on 2 boards. SSDs close to heatsinks stay at optimal temperatures for uninterrupted performance. Each SSD is easily fixed into place with a new mechanism called Q-Latch.

Connectivity options on the Crosshair VIII Extreme include 10G and 2.5G Ethernet, WiFi 6E and Bluetooth® 5.2. The motherboard also has two Thunderbolt 4 ports. Each of them offers 40 Gbps of bandwidth, as well as DisplayPort™ support for single-cable monitor connection. Offering 10Gbps bandwidth each, the USB 3.2 Gen 2 Type-A connector offers support for high-speed peripherals, while one of these ports can be used for the BIOS FlashBack feature, which allows for easy firmware updates. Audio outputs such as the CMOS clear button and S/PDIF are located on the rear panel. There are also internal headers for four USB 3.2 Gen 1 Type-A and two USB 3.2 Type-C® ports. One of the Type-C connectors supports 60W Power Delivery 3.0 for fast charging.

ASUS ProArt X570-Creator WiFi is the first ASUS ProArt motherboard to use the X570 platform. Users whose work is connected to their computers or workstations get maximum performance and stability with these motherboards. 3D artists, CAD and CAM designers, audio and video producers and even software developers can take advantage of this motherboard. 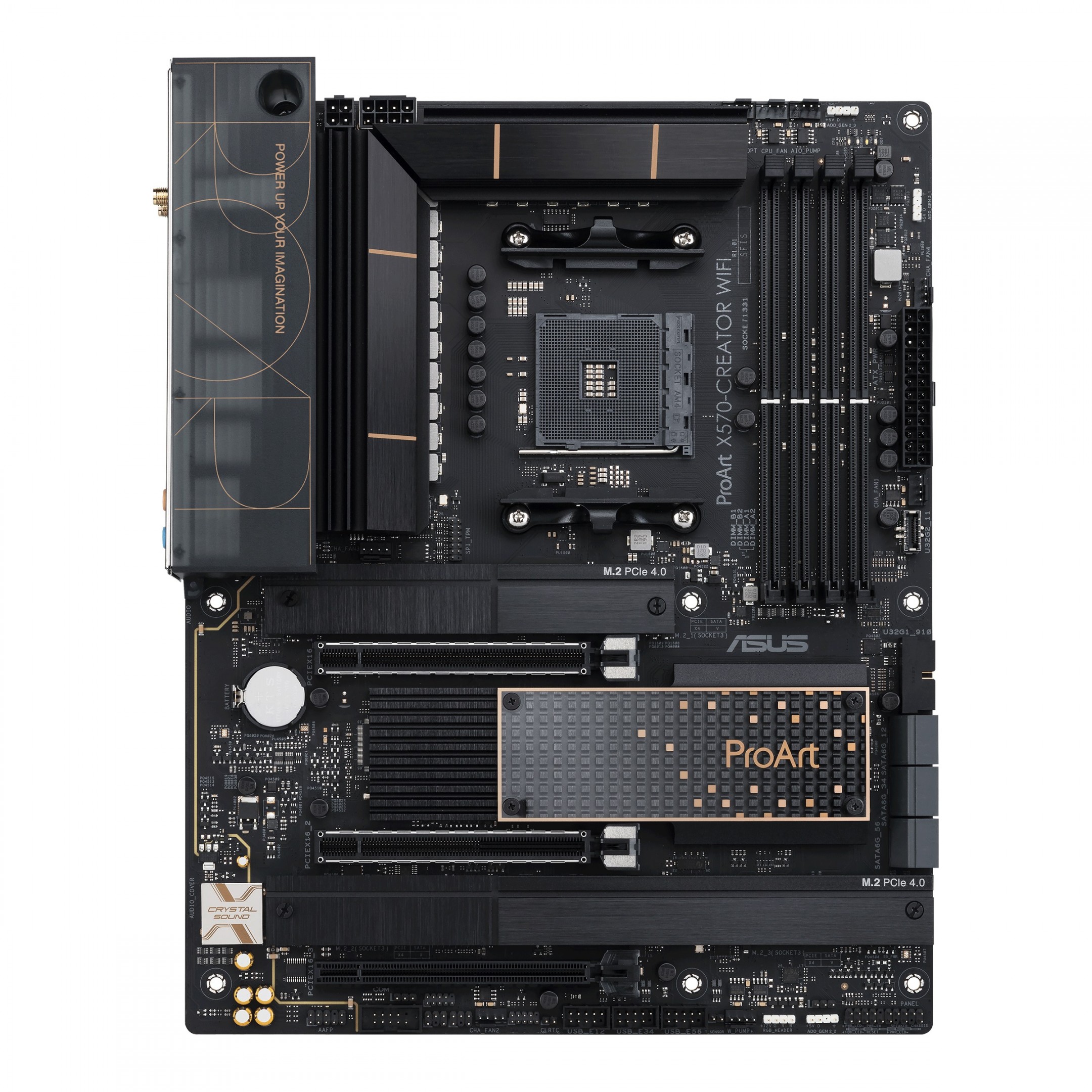 The ProArt X570-Creator WiFi has two Thunderbolt 4 USB-C ports with 40Gbps bandwidth and 15W Power Delivery charging support. These connections on the rear panel can be used for audio-visual devices and high-speed external storage devices. The stainless steel rear panel has four USB 3.2 Gen 2 and four USB 3.2 Gen 1 ports, along with a DisplayPort input compatible with Thunderbolt displays. There is also an extra internal USB 3.2 Gen 2 Type-C header for the front panel. The ProArt X570-Creator WiFi features 10G and 2.5G Ethernet for network connectivity, along with WiFi 6E and Bluetooth 5.2 options.

The VRM’s 14+2 power stage design and ProCool II solid pin power connectors create a suitable environment for the most powerful Ryzen processors. Thanks to the Q-Latch mechanism, it is possible to install NVMe drives without tools, on the motherboard where the VRM power stages, X570 chipset and three M. 2 slots are covered with large heatsinks.

Like the high-end ROG Crosshair VIII Extreme motherboard, the Strix X570-E Gaming WiFi II also features Dynamic OC Switcher technology. Thanks to this technology, users can get the most out of their Ryzen processors in any workload. The built-in Q-Code display, diagnostic LEDs and OptiMem II conductor array help overclockers achieve peak performance. Rich cooling possibilities are offered with five fan headers, special AIO and pump headers. 110 mm long storage devices can be placed in PCIe 4.0 M. 2 slots located in the middle of the motherboard and under the chipset heatsink. Each of these comes with thick aluminum heatsinks. 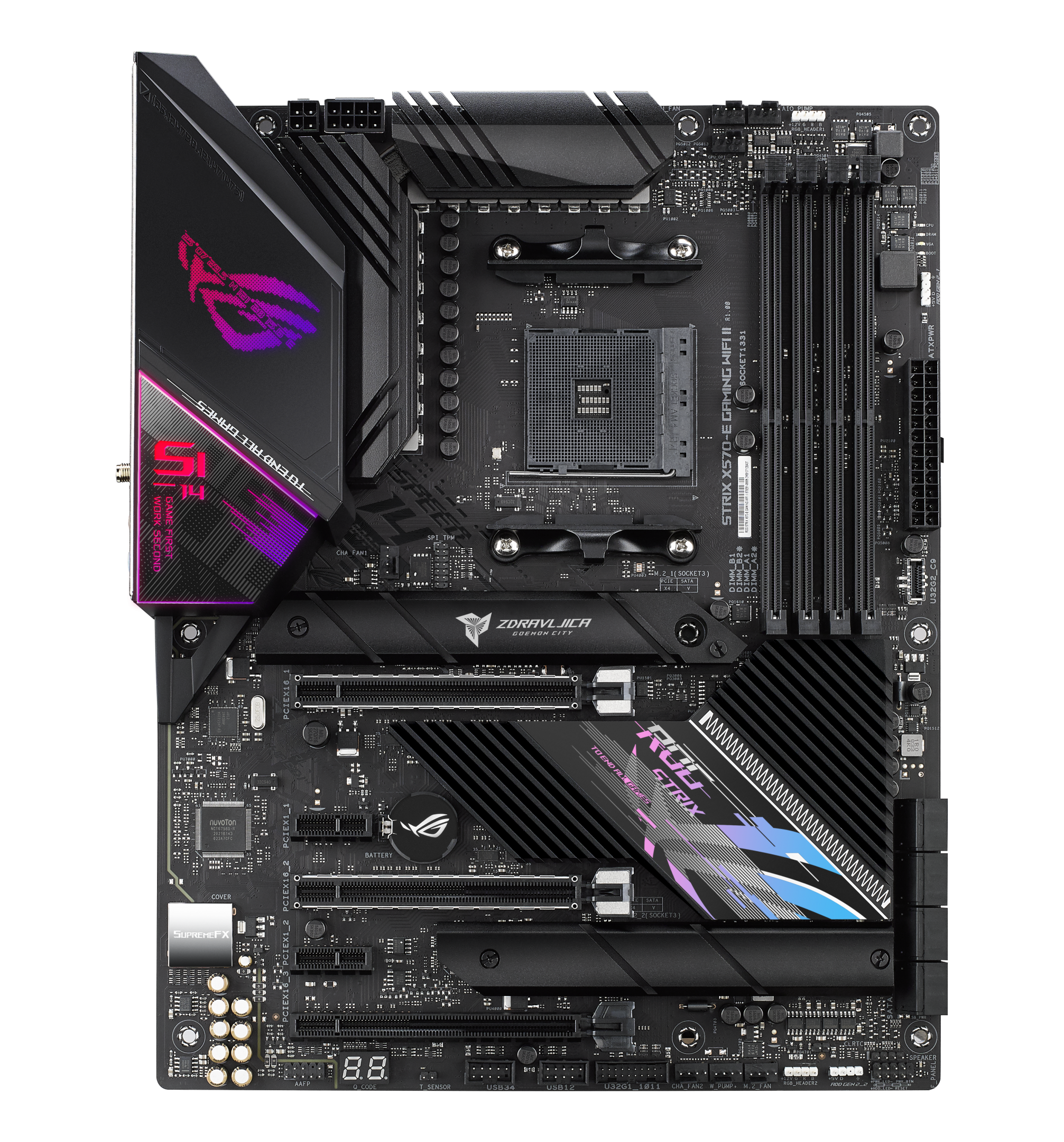 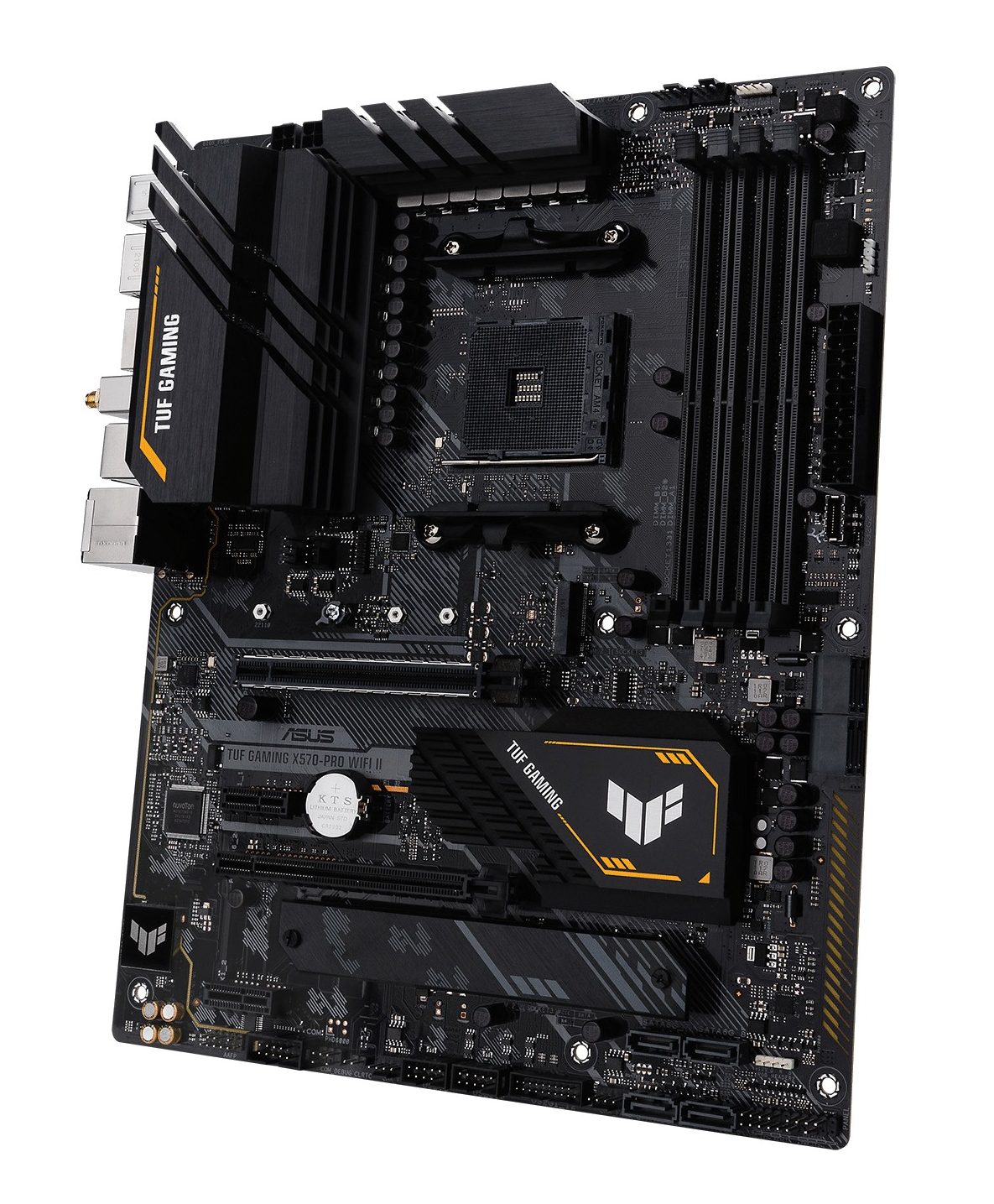