On November 24, there was an extreme increase in foreign exchange and we heard that many sectors had decided to stop selling. One of these sectors is the technology sector. If you remember, Apple was among those who stopped the sale in order to reorganize the product prices according to the dollar rate.

The company has not yet announced new prices and has not started selling products again. While users want to meet their pre-raise needs, there are also stock problems on other retail sites. Now a new one has joined this problem.

Apple has begun to cancel sales made through its own website. Even the orders made before the exchange rate climb do not pass the approval of the company and are cancelled. Below is what was ordered on November 23, the day of the dollar jump. iPhone 13 Pro Max You see the 512 GB payment. Although it was interpreted as unlawful, Apple canceled the order soon and made a refund. 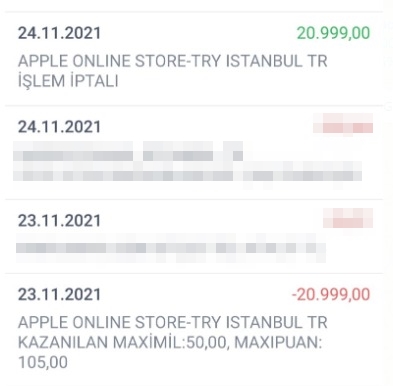 In addition, the situation does not only occur on the Apple website. The well-known online retail companies can also victimize users with similar excuses.

Finally, it should be noted that there is no statement by Apple about when this situation will end.