WhatsApp has officially announced the Communities feature for its Android and iOS app. Along with Communities, emoji responses, the ability to add up to 32 participants to a single voice call, and the ability to attach larger files are also new.

Communities are a feature for organizations like schools and neighborhoods to coordinate and share media, according to the blog post announcing the new features. It is not detailed how many users can join a WhatsApp community, but all communities will be private and end-to-end encrypted. 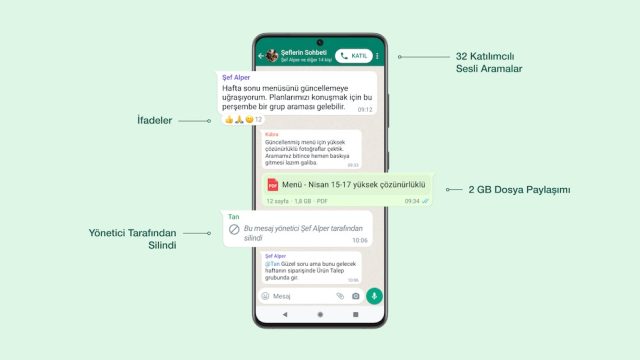 Besides Communities, WhatsApp is also adding emoji reactions. This feature had recently surfaced in a beta version of WhatsApp. This feature is almost the same as other social media platforms such as Messenger and Instagram, as you can imagine. WhatsApp has also confirmed that it will offer emoji shortcuts for desktop users as well as message responses. WhatsApp voice calling feature now supports 32 contacts at the same time. Previously, only 8 participants could join a voice call.

WhatsApp previously did not allow users to attach any files, documents or multimedia content exceeding 100 MB. This has also been changed. The file size limit is now increased to 2GB.

WhatsApp also offers group admins the ability to remove erroneous or problematic messages from anyone’s chats. All these new features are available in the latest version of WhatsApp. Meta also underlined that it may take time for them to reach everyone.