AMD CEO Lisa Su shared the company’s Zen 4 CPU roadmap at the Accelerated Data Center event, including a 96-core Genoa model and a 128-core Bergamo chip. At the same time, Milan-X processors with up to 768MB of L3 cache and Instinct MI200 series accelerators were also introduced at this event. 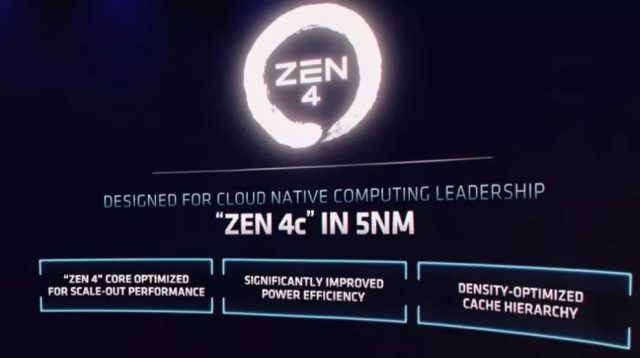 AMD also shared the first details of the 5nm TSMC process it will use for the new Genoa and Bergamo chips, claiming it delivers 1.25 times the performance with twice the density and power efficiency than the 7nm process the company uses for its current generation chips.

The new roadmap covers fourth generation EYPC processors. 96-core Genoa will take its place in the market in 2022 with 5nm production. The 128-core Bergamo family, which is also based on 5nm production technology, will be released in 2023. In addition, Bergamo comes with a new type of ‘Zen 4c’ core optimized for certain features. So AMD’s Zen 4 chips will come with two types of cores, and the ‘c’ cores will be smaller.

AMD has created a new Zen 4 core called ‘Zen 4c’ and these cores are designed for native workloads in cloud-based applications. Cores with this ‘c’ suffix are likely smaller than the standard Zen 4 cores that will be released in Genoa, and some unnecessary functionality has been removed to improve computational density.