The number of users collecting APU systems has increased considerably these days when external display cards are expensive. Although the current Ryzen 5000G APUs are very successful, we would not be wrong to say that the GPU performance cannot fully meet the expectations. Now, allegations have been made about the new APU series based on the Zen 3+ (?) architecture.

Greymon55 says that the AMD APU series powered by the updated Zen 3 architecture is already in mass production. The leak also claimed that the red team has six other products available at their packedollarseme facilities in China, ready to launch in the first half of 2022. 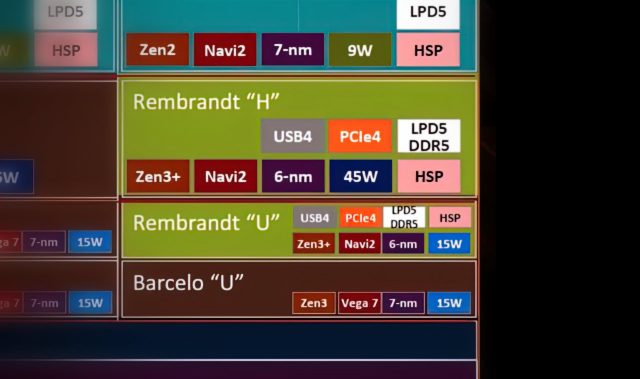 Rembrandt APU silicon will be used for both mobile and desktop platforms and will be released as the Ryzen 6000G series. The 6000U and 6000H series will replace the Ryzen 5000 mobile processors codenamed Cezanne.

With the Rembrandt family we mentioned in the past, there is a possibility of using RDNA 2 architecture on the graphics side. If this is true, there can be tremendous performance gains in graphics performance as well as CPU performance. On the other hand, Intel is also making significant improvements when it comes to integrated graphics, and AMD has to be competitive in this regard.

Let’s note that the AMD Rembrandt Ryzen 6000G family with built-in graphics processors can be introduced at CES 2022. Again, Ryzen 4000 Renoir and Ryzen 5000 Cezanne APUs were announced at this fair.