AMD has finally officially announced the highly anticipated next generation Ryzen 6000 ‘Rembrandt’ APU family. Mobile processors that will power countless laptops are coming to both high-end and low-power laptops with the new Zen 3+ core architecture as well as the advanced RDNA 2 graphics core architecture.

Just like the last generation Ryzen 5000H and Ryzen 5000U ‘Cezanne’ family, Ryzen 6000 APUs, codenamed Rembrandt, are divided into two series, Ryzen 6000H and Ryzen 6000U. Let’s add that the new APUs will also be based on refined 6nm manufacturing technology rather than the current 7nm process. 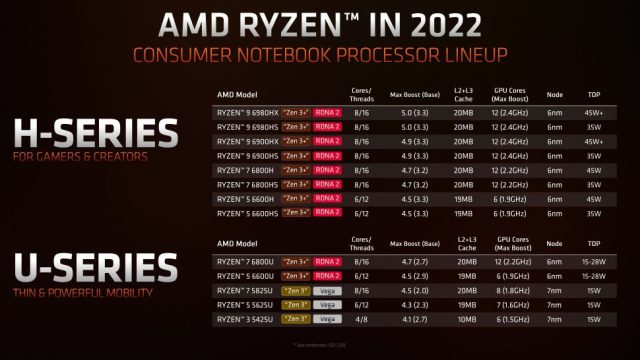 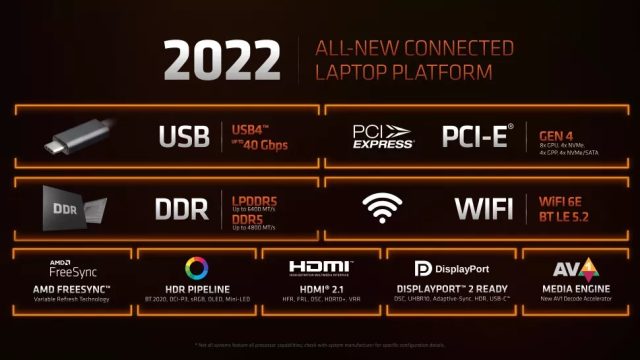 The 6000U series will have only two SKUs taking advantage of the Zen3+ architecture: Ryzen 7 6800U and Ryzen 5 6600U. As for the other refreshed processors, they continue to use the Zen 3 architecture and come with some improvements.

Rembrandt was also the first CPU platform to support Microsoft’s Pluton technology. Pluton aims to protect you from firmware attacks while on the go with your laptop, while providing stronger security to prevent physical attacks and encryption key theft. 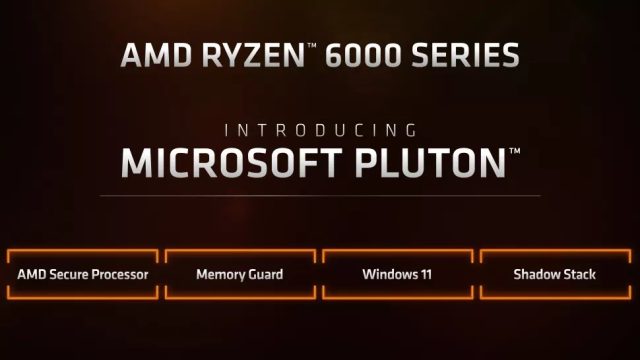 This technology was first released on Xbox and AMD’s EPYC data center processors, while joining other security features such as AMD Secure Processor and Memory Guard.

AMD hasn’t shared all the details yet. But as the name suggests, we do know that the Zen 3+ architecture is an iterative update over the existing Zen 3 architecture that powers the Ryzen 5000 chips.

It was said that there are no changes at the microarchitectural level (ie kernels). However, the move from 7nm to 6nm has allowed the company to put in more transistors per square millimeter. 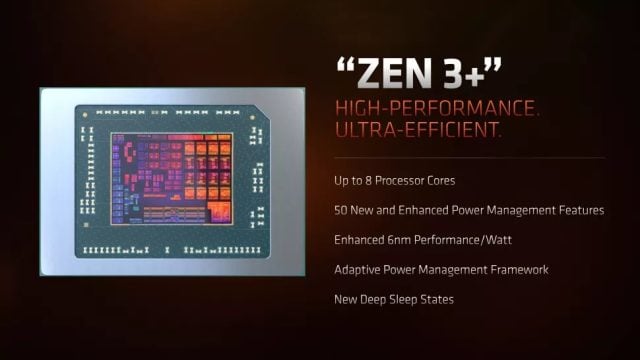 TSMC’s 6nm process offers up to 18% higher logic density than the 7nm “N7” process, but offers similar power and performance values. In addition, the N6 uses EUV lithography with up to five layers of the chip, thereby reducing cost and speeding up production.

AMD’s RDNA 2 iGPU is the first ray-traced APU on the market. Rembrandt processors have up to four more CUs than units offered with Vega, and we’re looking at twelve RDNA 2 CUs that can clock up to 2.4GHz. 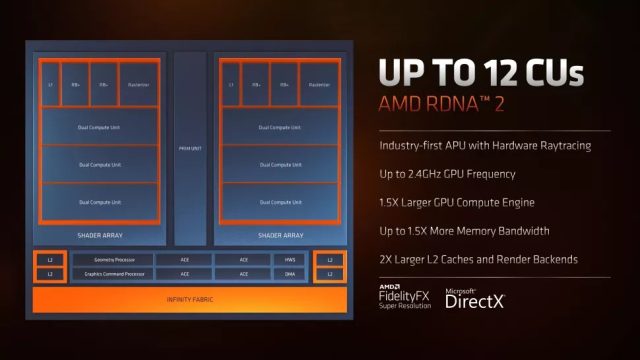 Let’s underline that the RDNA 2 graphics engine is also powered by LPDDR5/DDR5. Improved memory throughput will greatly improve performance, and PCIe 4.0 connectivity is predicted to apply to the GPU as well.

H series processors are generally prepared for gamers and content developers. AMD can boost its HX series lineup up to 45W+ TDP for the fastest gaming laptops. The 35W HS models fall into the compact performance category and the H series will be used in more powerful laptops with 45W.

All AMD Ryzen 6000 APU powered laptops are home to a host of technologies including Freesync Premium/Pro, HDR, HDMI 2.1, DisplayPort 2 and AV1 Decode. In addition, technologies already found in the latest generation Ryzen 5000 APUs have been upgraded to deliver a better AMD Advantage experience, such as AMD SmartShift MAX, SmartShift ECO and Smart Access Graphics modes. AMD Ryzen 6000 laptops are expected to go on sale February 2022.

The four Ryzen 9 models come with eight CPU cores and 16 threads paired with 12 RDNA 2 CUs clocking up to 2.4GHz. This is a notable improvement over the Vega graphics units that come with Cezanne processors. It is worth noting that up to four more CUs (Execution Units) are offered than Cezanne chips. The overclockable flagship Ryzen 9 6980HX has a base clock of 3.3 GHz and a boost clock of 5.0 GHz.

The Ryzen 7 series comes with lower CPU clock speeds and a lower GPU frequency of 2.2 GHz. In addition, the chips again carry 8 cores and 16 threads.

Ryzen 5 class mobile chips have 6 cores and 12 threads based on Zen 3+ architecture and can reach frequency speeds of up to 4.5 GHz. The integrated RDNA 2 GPU has a frequency of 1.9 GHz and six cores.

AMD will launch only two processors in the Ryzen 6000U ‘Rembrandt’ APU family, which will be expanded later. The company will renew some of its Ryzen 5000U chips under the ‘Barcelo’ label to close the big gap of the previous generation chips. Rembrandt will have 6nm Zen 3+ and RDNA architecture, while Barcelo will have 7nm Zen 3 & Vega architecture.

The Ryzen 5 667U, on the other hand, will run at a base clock of 2.90 GHz and will go up to 4.5 GHz. The number of RDNA 2 Execution units is reduced to six, while the frequency rate remains the same as 2.2 GHz. Both chips are much more powerful than the previous generation, with higher frequency speeds alongside faster RDNA 2 iGPUs.

The company claims that the Ryzen 6000 has 30% lower power consumption during video conferencing, reduces power by 15% when browsing the web, and saves 40% when streaming video. So much so that these comparisons were made against the previous Ryzen 5000 series. 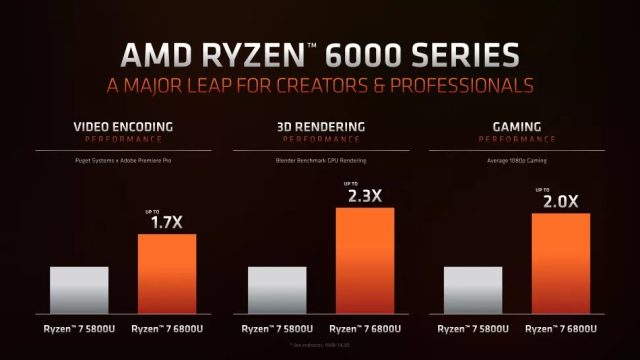 AMD’s app tesdollar series claims that these power savings come with a huge leap in performance. The chipmaker emphasizes that compared to the Ryzen 5800U, the Ryzen 7 6800U offers up to 1.3 times the multi-thread performance, 1.1 times the single-thread performance, and 1.3 times more productivity applications. AMD claims coding, rendering and gaming increased by 1.7x, 2.3x and 2x respectively when looking at more intense workloads. 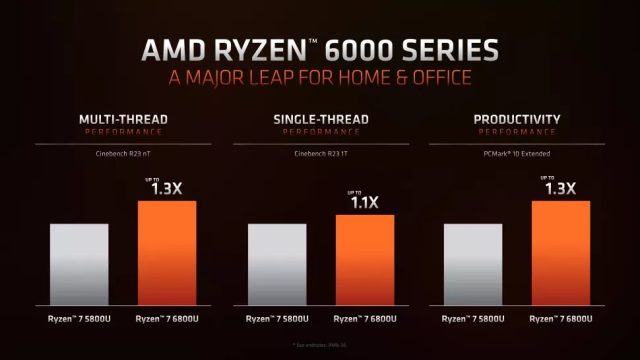 The Ryzen 7 6800U also benchmarked the integrated graphics of the Intel Core i7-1165G7 and the entry-level MX450 discrete GPU. In the entire series of gaming tesdollars, the Rembdrandt APU is ahead. AMD also specifically states that the 6800U is 2x ahead of the 5800U in almost every game tested. 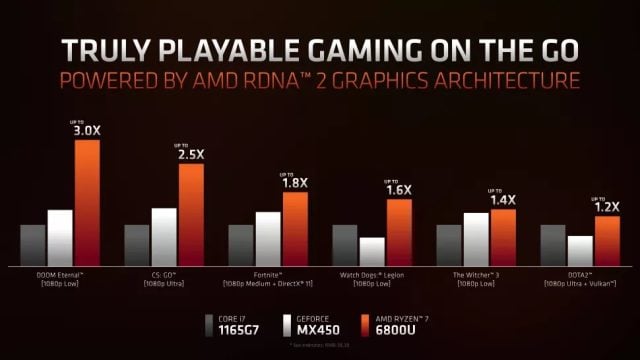 The red team, on the other hand, announced at CES that Far Cry 6 now supports FidelityFX Super Resolution (FSR) and released a demo that reaches 59 FPS with the quality preset. This means an improvement of 51%. 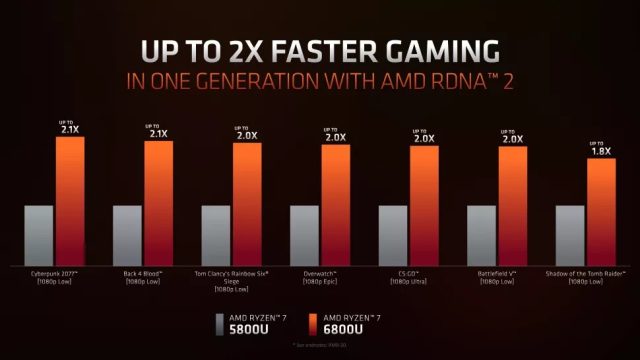 The company hopes to have more than 200 premium systems on the market by 2022, but that includes the entire Ryzen portfolio (including the 5000 series). AMD plans the first shipments of Ryzen 6000 mobile systems to begin in February. We look forward to the detailed tesdollar series of the numerous developments and especially the mobile chips that come with it. 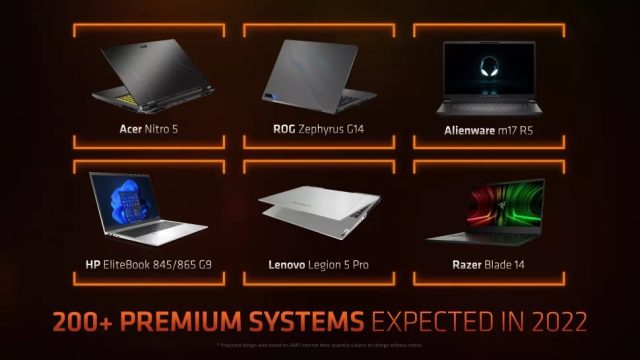