Thanks to the new technology, a total of 768 MB of L3 cache can be used per chip. This means that soon there will be dual socketollarsi servers with 1.5GB L3 cache in the system. AMD also shared a few examples of workloads that would benefit, and an impressive benchmark result that showed a 60% performance increase. The chips, codenamed Milan-X, will be available in the second quarter of 2022, but are currently available as a preview sample on Azure. 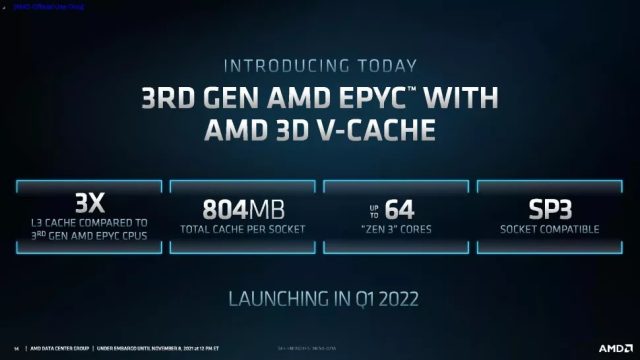 The Reds first unveiled its 3D V-Cache technology at CES 2021 and showed off a third-generation Ryzen prototype equipped with an additional L3 cache unit. 3D V-Cache uses a new hybrid-binding technique that combines an additional 64MB of 7nm SRAM cache stacked vertically on top of Ryzen computing chips to triple the amount of L3 cache.

AMD claimed that it provides a performance increase of up to 15% in some games. In other words, these processors may even make a name for themselves in the field of gaming when they are released early next year. 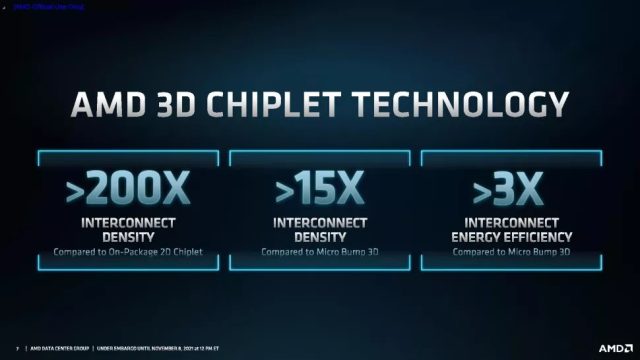 The 3D V-Cache technology has been talked about for a long time and there is a possibility that this technique can be used in Infinity Cache caches in Zen cores and even Radeon cards. Now AMD is bringing this technology to their long-rumored Milan-X data center processors, but they haven’t shared full details of the new chips yet. In addition, it has been confirmed that the chips will come in at least 16, 32 and 64 core variants.

As with its consumer derivatives, AMD places a single 6x6mm L3 cache layer directly on top of the L3 cache already present in every CCD (computing chip). Each CCD had 32 MB of L3 cache before the change. The vertically stacked L3 cache unit adds another 64 MB cache, bringing the cache per CCD to a total of 96 MB. Milan-X chips will extend to 64-core models with eight CCDs, meaning a total of 768MB of L3 cache per chip will be offered.

Vertically stacked L3 cache increases overall latency by roughly 10%. On the other hand, AMD continues to use the same Zen 3 cores as normal. The control circuit for 3D V-Cache was added as a forward-looking design choice during the initial design phases. That is, existing EPYC Milan chips are adopted as the building block, so the chips use SP3 slots on EPYC servers and a BIOS update is required. 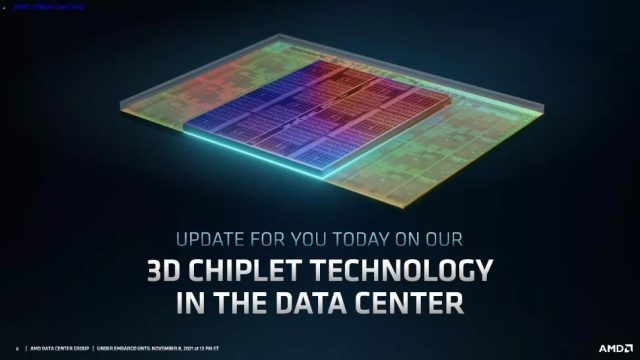 Additionally, the red team said that although it has worked with several partners to create a series of certified software packages, no software changes are required to take advantage of the increased cache capacity.

As for performance, Milan-X has been claimed to deliver an increase of up to 50% in certain ‘targeted workloads’ consisting largely of a variety of product development software. AMD touted the performance of existing AMD EPYC Milan models across three workloads, showing that the two EPYC 75F3s beat the two Intel Xeon 8362s in three of those workloads.

The official features or price speculation of the new EPYC processors have not been announced yet. However, you can see the technical specifications based on historical information in the table below and this table will be updated after the official announcement.