AMD has been posting 50% year-over-year revenue growth for five consecutive quarters, driven by increased demand for powerful client and server CPUs, as well as PCs and servers. The hardware maker announced new record revenues for the company as it managed to increase the supply of its latest products in high demand. 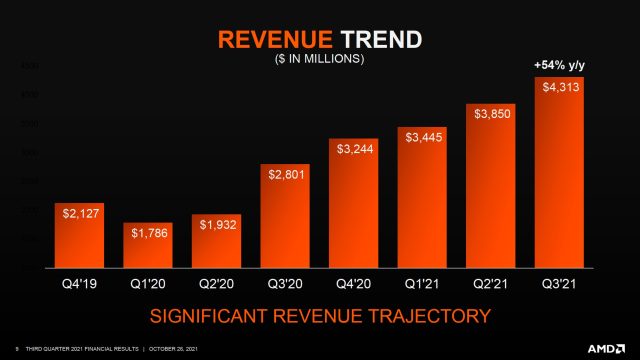 AMD president and CEO Dr. Lisa Su said, “AMD had another record quarter as revenue grew 54% and operating income doubled year over year. ” says. “Our data center sales have more than doubled year over year, while 3rd Gen EPYC processor shipments have increased significantly this quarter. Our business accelerated significantly in 2021, growing faster than the market based on our leadership products and consistent execution. ” he adds.

It is noteworthy that AMD’s stocks at the end of the third quarter were worth $1,902 billion. This appears to be the result of improved procurement by AMD’s partners and perhaps a preference for more expensive products.

With the demand for PCs, servers and consoles remaining strong and the supply situation improving, the company’s expectations for the last quarter are much higher. AMD expects its revenue to grow to $4.5 billion, up approximately 39% compared to Q4 2020 and 4% quarter on quarter.