Earlier in the year, we saw the Athlon Gold Pro 4150GE model, one of the Athlon Gold 4000G series (Renoir) APUs for the first time. The AMD Athlon CPU, which appeared on an HP-branded mini PC, confirms that AMD is planning to add new members to the entry level.

At the heart of the HP ProDesk 405 G8 Mini PC, code 47M79EA, is quad-core and eight-thread Athlon Gold 4150GE processor is located. Oddly enough, even though the CPU is listed with eight threads, it’s worth adding that this might be a misspelling. In addition, it should be noted that these four cores used are based on the Zen 2 core architecture. 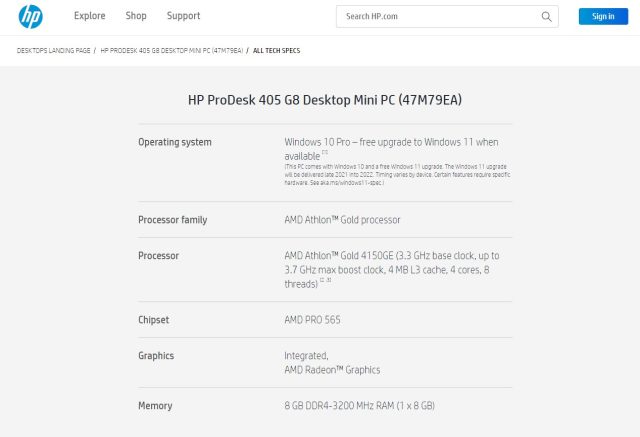 The 4150GE is said to have a TDP of 35W, while the 4150G variants are reported to have a higher TDP of 50-65W. We also expect these processors to offer 3rd generation Vega GPU cores and a total of 5 CUs (Compute Units). The previous 3150GE offered 3 compute units operating at 1100 MHz.

There are no details other than two leaks about Athlon processors that appeal to low-budget users. Therefore, it is not possible to say anything definite about the release date.