This development, which is a first in the world of science, is important enough to give direction to research. Cloning from an adult somatic cell using the nuclear transfer process was first applied in Dolly. Dolly was the first laboratory to be obtained by scientific methods. Scientists have tried to clone primates with the same technique. Although live embryos have been cultivated for years, these embryos are killed without being converted into healthy individuals of their own class.

Basically, the technique starts with taking the nucleus of a cell taken from the skin of a living thing. This nucleus is combined with the DNA of another egg of the same species. This combination is supported by enzymes in the process. Thanks to the enzyme supplements given over time, the egg cell becomes an embryo as if it were natural conditions.

That is to say, the process of formation of a baby through human control from beginning to end. Until there is a stage of mating or fertilization, the female subject to be cloned is artificially pregnant and is giving birth. The primates that scientists have tried after a successful sample like Dolly have always been low during the embryo period.

Mu-ming Poo, director of the Institute of Neuroscience at the Chinese Academy of Sciences in Shanghai, said that by adopting a few new techniques, they eventually succeeded. Among these new techniques are methods that allow the use of various compounds that have not previously been tested on primates, which encourages reprogramming of cells.

The success rate of scientists is still low. With a 60% chance, they expected this experiment to be successful. But luck has gone and two baby maca has come to the world. 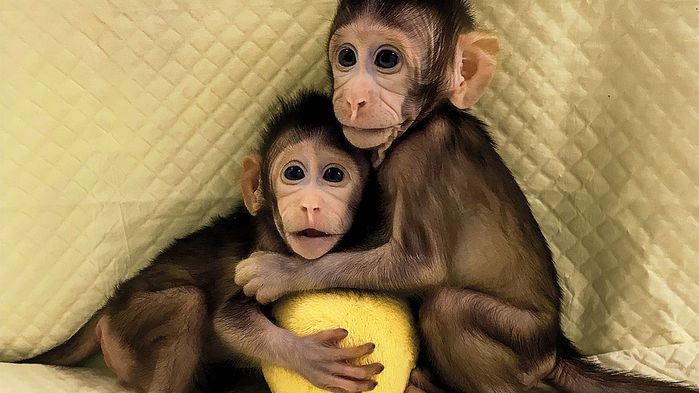 The question everyone is curious about: Can this practice be used for people?

Researchers are more ethical in using the apes brought to the world in the artificial environment for experimentation, in view of the use of apes as subjects in many scientific activities conducted around the world.

In fact, if you look at it, the number of institutions that oppose the use of monkeys in experiments, regardless of whether they are artificial or natural is increasing significantly. “I do not see the desire to use cloned apes for research,” said field scientist Alan Trounson, who works at the Hudson Institute of Medical Research in Australia. Drug producers are no longer asking for research on monkeys. ”

The team acknowledges that work always renders the ethical issues discussed. Because the method proved to be practical on people over and over again. But it is a reality that governments and sensitive societies will not allow people to clone. At least the world is not ready for such a radical turning point until recently.

Conspiracy theories, of course, are turning, and since the day Dolly came out, it is said that people are secretly cloned as well. However, as we have said, they can not go beyond the unconfirmed conspiracies.