In August, we talked about some details of AMD’s Ryzen Threadripper 5000 series processors. We were actually expecting chips with the codename Chagali in the last quarter of this year, but some rumors are raising the possibility that new HEDT CPUs will be delayed to 2022.

We previously shared the test results of the Ryzen Threadripper Pro 5995WX and 5945WX processors. Recently, the Pro 5975WX running on a system called “Cloudripper-CGL” was used with 128GB of RAM. 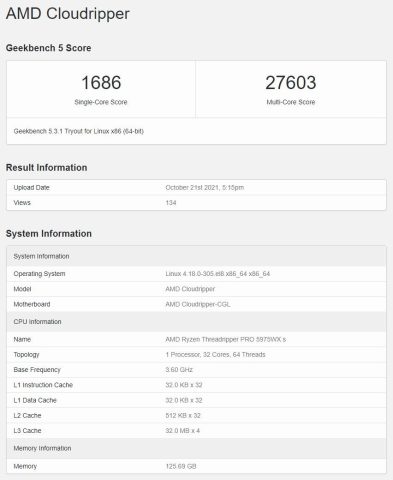 The chip’s base clock frequency appears to be set to 3.6 GHz, but during testing it peaked at 4.53 GHz. The processor scored 1686 points in the single-core comparison and 27,603 points in the multi-core comparison. If we compare these scores with the 32-core Ryzen Threadripper 3970X, the Threadripper 5975WX was 34% faster in the single-core workload and 23% in the multi-core test.