Claiming to take the lead in the desktop again with the 12th generation Alder Lake, Intel is also working on mobile processors to be used in laptop computers. The flagship of the upcoming Alder Lake-P series, the i9-12900HK, showed itself in the performance test series.

The upcoming Alder Lake-P processor was working on the Lenovo 82S9, which will be the next generation Legion gaming laptop model. In the entries, we see that the new CPU reaches frequency speeds of up to 4976 MHz. That’s why we expect the 12900HK to have a boost frequency of 5.0 GHz or slightly higher. 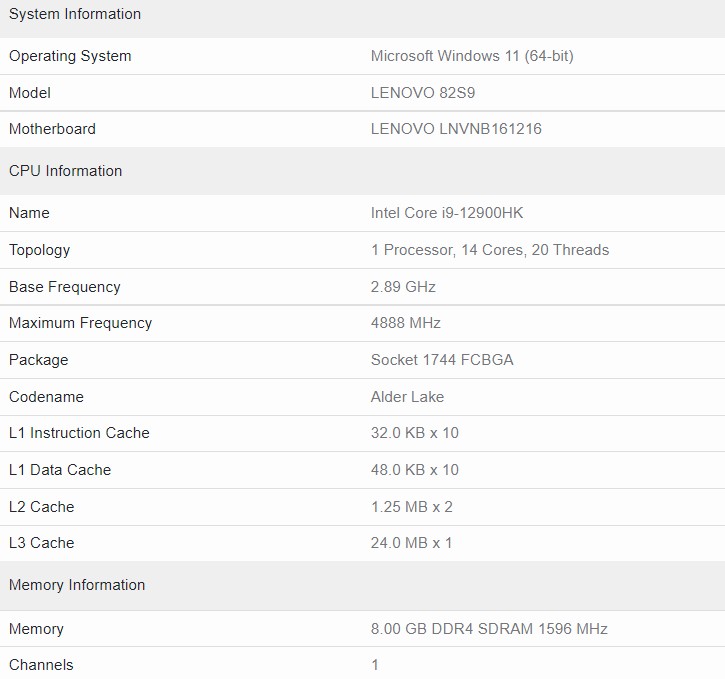 The Core i9-12900HK carries 14 cores along with 6 performance and 8 efficiency cores. The thread count will remain at 20, as the efficiency cores do not have Hyper Threag technology. With the multiplier unlocked for overclocking, the CPU will sit at the top of the 12th generation mobile processors. However, in the future, blues may launch yellow with higher clocked variants such as 12980HK.

Let us state from the beginning that the scores in Tesdollarser do not reflect the truth. In the previously leaked tesdollarser, the chip scored 1851 points, while the new single-core score is 100 points lower. Interestingly, multi-core performance was cut by almost half (6438 vs 13256), but it’s not clear why the multi-core score is so low.

On the other hand is the performance of Xe-LP graphics. The newly released Alder Lake-S desktop CPUs had up to 32 Execution Units. In contrast, mobile varyandollarsar will offer up to 96 Execution units.

The i9-12900HK offers exactly such a configuration, with a clock speed of 1.3 GHz. The CPU doesn’t have the most powerful iGPU on the market with a score of 11480 and actually lags behind the integrated RX Vega graphics.

So when will mobile chips hit the market? Intel will most likely launch the Alder Lake-P series in January 2022, and new laptops will begin to take their place on the shelves with new processors.